Fatima Sana Shaikh received vile comments on her recent picture, in which she's wearing a sari 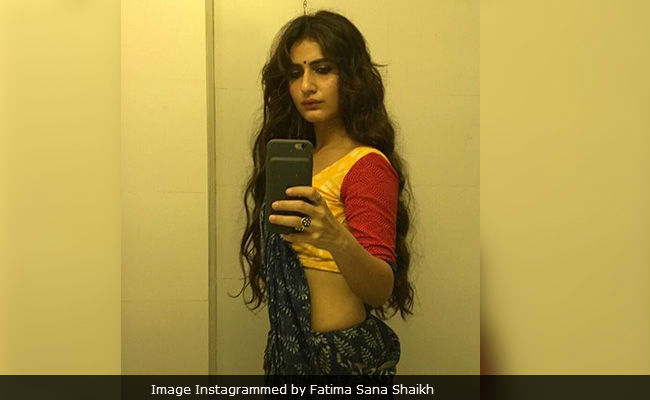 New Delhi: There's definitely something not OK with the Internet. Actress Fatima Sana Shaikh is 'again' trolled on social media for posting a picture of herself in a sari. Some of those offended object to the 25-year-old actress for wearing what they say is disrespectful clothing while others have branded it 'shameful' simply to be seen in a low waist sari on the Internet. "Really shame on u," wrote one user. "Allah say toh Daro jahanoom he milega tume burkha pehnooo," wrote another. But, some comments defended Fatima's right to wear what she chooses (even Fatima had something interesting to say about her picture, but later about this) and denounced those seeking to police her wardrobe. "Ignore them dear. You're looking fabulous," wrote one follower while another wrote: "Beautiful you Sana.....people would say without even thinking for a sec overlapping the fact that someone could look that beautiful."

But what delighted the Dangal actress' fans was the caption Fatima had written on her picture that read: "Shameless selfie." It seems Fatima really knows how to deal with the trolls.

Take a look at Fatima Sana Shaikh's picture, in which she's dressed in designer Swati Mukund's sari and is being trolled for it:

This is not the first time when Fatima has been trolled or has received vile comments on wearing her choice of clothes. Earlier, in the month of June, Fatima was trolled for wearing a swimsuit during Ramzan (Islamic holy month in which Muslims fast worldwide), when she was in Malta for the shooting of her upcoming film Thugs Of Hindostan. Some people branded it as 'besharmi' on Instagram.

Promoted
Listen to the latest songs, only on JioSaavn.com
Fatima was cast with Aamir Khan in last year's Dangal, which has already touched the 200 crore mark worldwide. It was tremendously hit with both film critics and audience.

Fatima will next feature in Thugs Of Hindostan, co-starring Aamir Khan, Katrina Kaif and Amitabh Bachchan.