"Surreal" is how Rubina Dilaik described her lunch date in Maldives 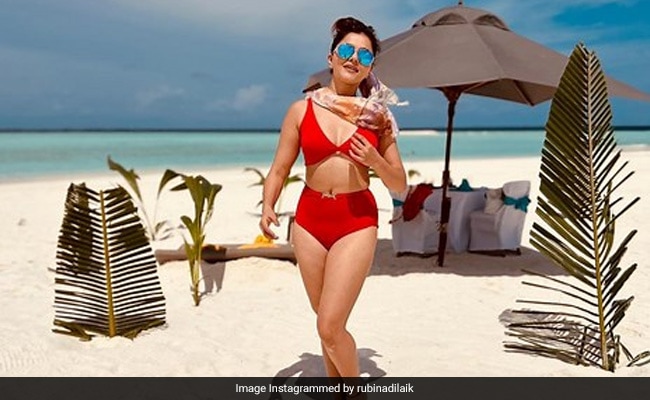 Pictures from Rubina Dilaik's Maldives vacation keep getting better and better. The actress, who is holidaying in the island nation with her husband Abhinav Shukla, has actively been sharing pictures from her getaway and they are all things pretty. On Thursday night, she shared pictures from her "lunch date" and she described the experience as "surreal." She captioned her post: "A lunch date like never before... The drop dead gorgeous view, just us on the island! Surreal. "In the pictures, Rubina can be seen chilling on the beach in red swimwear.

Meanwhile, her husband Abhinav Shukla too shared pictures nd he wrote: "Sandbank lunch with the best view." Check out the pictures here:

Rubina Dilaik, a successful TV actress now, began her career with beauty pageants. She won Miss North India beauty pageant as a teenager. She was also crowned Miss Shimla and also won a few other local contests. She made her debut on the TV show Chotti Bahu in 2008. She is best-known for her work on shows such as Saas Bina Sasural, Punar Vivah, Jeannie Aur Juju and Shakti - Astitva Ke Ehsaas Ki.

After winning Bigg Boss 14, where her husband and actor Abhinav Shukla also featured as one of the contestants, she starred in music videos back-to-back. The first one was titled Marjaneya, sung by Neha Kakkar and it also featured Abhinav Shukla. Rubina Dilaik also featured in another single titled Galat, opposite former Bigg Boss contestant and friend Paras Chhabra. The track was sung by Asees Kaur. Both the songs trended big time.