We spotted an interesting remark in the comments section on the pages of her fan club - "The photo shoot just reminds me of her fashion movie." Priyanka Chopra starred as a supermodel in the Madhur Bhandarkar-directed 2008 movie 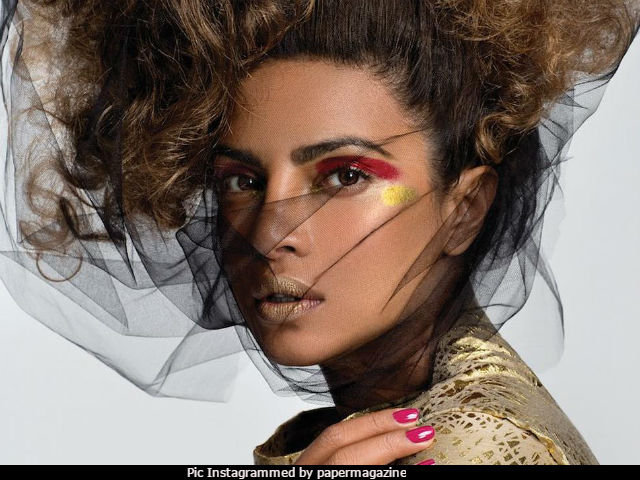 Priyanka Chopra on the cover of Vogue Magazine (courtesy papermagazine)

New Delhi: Priyanka Chopra is not just done with Vogue. The 35-year-old actress has a busy roster with all her shooting schedules and projects outside the realm of films - like attending the Toronto International Film Festival as a special guest. She has also fashionably squeezed out time to make September look a lot better, featuring on the covers of Vogue Magazine first and then Paper Magazine's Fall issue. Priyanka's fan clubs have already shared pictures from the photoshoot on social media and we must admit, they spell nothing but drama, in the most vogueish fashion possible. Priyanka's mood and make-up sort of reflect the tone of the season as reflected in New York - in shades of golden, orange, red and black. Credits for the photoshoot go to New York-based photographer Michael Avedon with hair styling courtesy to Danilo and Priyanka has been styled by Jimi Urquiaga, Cuban stylist.

We spotted an interesting remark in the comments section on the pages of her fan club - "The photo shoot just reminds me of her Fashion movie." Priyanka Chopra starred as a supermodel in the Madhur Bhandarkar-directed 2008 movie.

In her interview to Paper Magazine, Priyanka sort of revealed the secret behind her jam-packed schedule. "I never say 'no' to anything because you never know the new experience that will come your way," she says, adding: "Somehow, ambition and feminism have turned into bad words, and they're not." Priyanka spends a considerable amount of her time shuttling between India and New York, where has an apartment and is a temporary resident. She became a popular name in the West much before her Hollywood debut - as the antagonist in Dwayne 'The Rock' Johnson's Baywatch movie - for her popular American TV show Quantico. Priyanka also has two other Hollywood films - Isn't It Romantic? and A Kid Like Jake coming up.

Unstoppable. Unruly. Unconstrained. Call it what you like. It is what it is. Thank you @VOGUEIndia. Always good to see you and to be styled by you @anaitashroffadajania! Until next time....

Promoted
Listen to the latest songs, only on JioSaavn.com
In Bollywood, Priyanka Chopra seems to be spoilt for choice - she reportedly has some 25 scripts to choose from but none of them are happening this year. Referring to a rumoured film with Sanjay Leela Bhansali and any other project in Bollywood, her mother Madhu Chopra told news agency PTI: "Priyanka has no time this year to do a Hindi film. If he is making it this year then Priyanka is definitely not doing it."

Quantico season 3 is expected to premiere next year.