"Priyanka Chopra spent the evening with Saab and Saira Baji. Saab's health much better," was tweeted from Dilip Kumar's profile 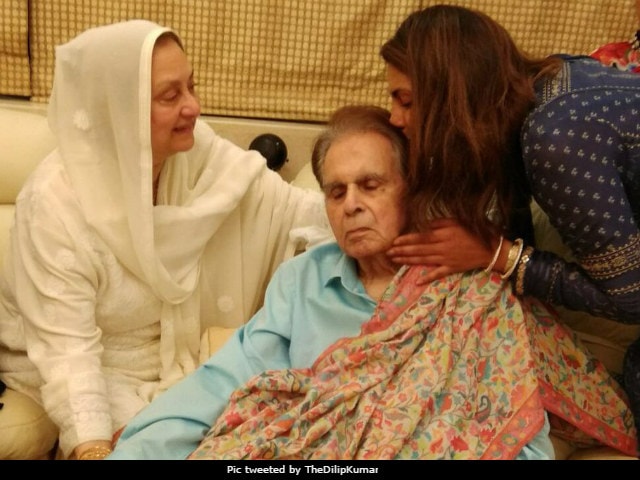 New Delhi: Legendary actor Dilip Kumar had actress Priyanka Chopra visiting him on Monday. Priyanka, who is currently in India to reportedly zero in on the hero of her next Bollywood film, which is speculated to be one with Sanjay Leela Bhansali. The 35-year-old actress uses up a considerable space on her roster shuttling between India and the US, where she became a popular name after her TV show Quantico. Faisal Farooqui, who is a family friend and signs of the tweets as 'FF', tweeted pictures from Dilip Kumar's profile to say: "Priyanka Chopra spent the evening with Saab and Saira Baji. Saab's health much better." In the pictures, Priyanka can be seen greeting the veteran actor with a kiss on the forehead while his wife Saira Banu sits by. In August, Dilip Kumar was in the hospital for a brief while for a kidney related ailment.

Following the tweet, Priyanka posted a response saying: "It was lovely seeing both of you. Thank you and so good to see Saab much better. Much love."

Mr Farooqui had earlier operated from Dilip Kumar's profile to say that updates about the actor's health will be shared with evening tweets every day. This is what he posted today from Dilip Kumar's handle: "We spent a good time over lunch today. This picture was taken by me about 45 mins after lunch."

We spent a good time over lunch today. This picture was taken by me abt 45 mins after lunch. -FF (@faisalMouthshut) pic.twitter.com/BWBIeDxoov

It was only last month when Dilip Kumar's "mooh-bola beta - 'son' Shah Rukh Khan" dropped by the actor's residence. This is what Saira Banu had tweeted:

Dilip Kumar has been in and out of Mumbai's Lilavati Hospital for the past few years. In December last year, Dilip Kumar was admitted to the same hospital after complaining of swelling in right leg and experiencing fever.

Promoted
Listen to the latest songs, only on JioSaavn.com
Dilip Kumar, who received the Padma Vibhushan in 2015, the Padma Bhushan in 1991 and the Dadasaheb Phalke Award in 1994, is best known for his starring roles in films like Madhumati, Devdas, Mughal-e-Azam, Ganga Jamuna, Ram Aur Shyam and Naya Daur.

In Bollywood, Priyanka Chopra is seems to be spoilt for choice - she reportedly has some 25 scripts to choose from. About her yet-unconfirmed film with Sanjay Leela Bhansali, her mother Madhu Chopra told news agency PTI: "Priyanka has no time this year to do a Hindi film. If he is making it this year then Priyanka is definitely not doing it." Baywatch was her Hollywood debut and she has two other Hollywood films - Isn't It Romantic? and A Kid Like Jake coming up.