Dilip Kumar's wife Saira Banu also gave a health update and said: "Sahab's doing much better since he returned from the hospital" 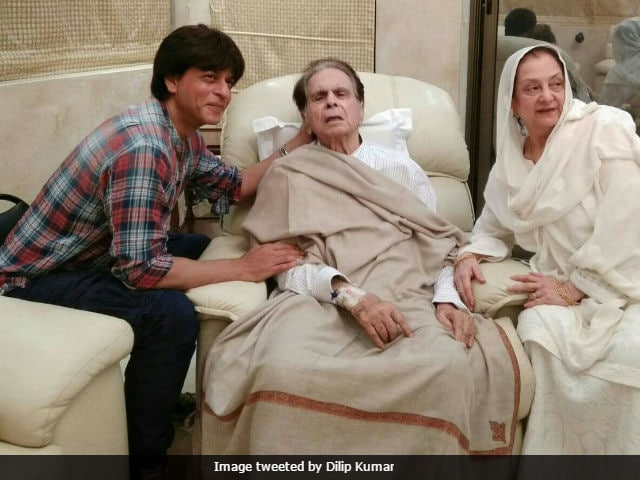 New Delhi: Actor Shah Rukh Khan visited veteran actor Dilip Kumar at his Mumbai residence on Tuesday. Dilip Kumar's wife Saira Banu shared pictures from their meeting on the Jugnu actor's official Twitter handle and wrote in caption: "Sahab's mooh-bola beta - "son" Shah Rukh Khan visited Sahab today. Sahab's doing much better since he returned from the hospital. Shukar Allah." Dilip Kumar, who has been in and out of the hospital quite a few times in the past few months, returned home after being treated for a kidney related problem recently. The 94-year-old actor went home on August 9 after spending a few days in the hospital.

In one of his previous interviews, Shah Rukh had said that Dilip Kumar is the 'pillar of the film industry.' Shah Rukh also covered a special edition of Filmfare magazine (the 100 years of Indian cinema issue) with Dilip Kumar and Amitabh Bachchan - the iconic actors of their generation. SRK and Dilip Kumar also share the record for the most wins (eight to be precise) in Filmfare Best Actor category.

Shah Rukh Khan stepped into Dilip Kumar's shoes when he played the role of Devdas in Sanjay Leela Bhansali's 2002 film of the same name. Sarat Chandra Chattopadhyay's novel Devdas has been adapted on the big screen several times but the best remembered versions are that of the Bimal Roy-directed 1955 film starring Dilip Kumar and Mr Bhansali's adaptation featuring SRK.

Saira Banu, who stood by Dilip Kumar's side while he was hospitalised, said that his recovery this time was no less than a 'miracle.' She told news agency IANS: "It was a nightmare for him to deal with the sudden deterioration of his health. He is in good health now. All of it felt like a nightmare, how he suddenly fell sick. I am thankful to the Almighty." However, Dilip Kumar made a satisfactory recovery, as Saira Banu had said in her statement.

Promoted
Listen to the latest songs, only on JioSaavn.com
Dilip Kumar is the star of films like Andaz, Mughal-E-Azam, Ram Aur Shyam and Naya Daur. The actor was honoured with the Padma Vibhushan in 2015, the Padma Bhushan in 1991 and the Dadasaheb Phalke Award in 1994.