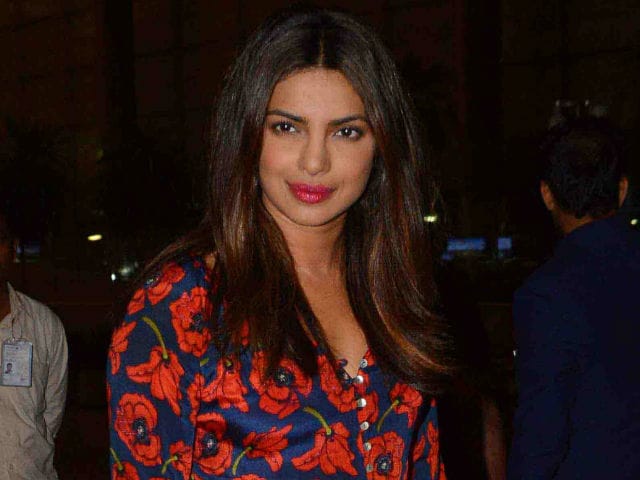 New Delhi: Priyanka Chopra is a super busy actor and things will not get into relaxation mode for her any time soon. The 35-year-old actress recently returned to Mumbai to reportedly finalise the lead actor for her next Bollywood project Gustakhiyan with filmmaker Sanjay Leela Bhansali. And now, an insider told mid-day that Priyanka has 25 scripts to choose from, for her next few projects. "Priyanka has received close to 25 scripts, including ones from Pink director Aniruddha Roy Chowdhury, Shimit Amin (Chak De! India), Ali Abbas Zafar (who is currently filming Tiger Zinda Hai with Salman Khan and Katrina Kaif), Kabir Khan (last directed Tubelight), Vishal Bhardwaj (producing Deepika Padukone's upcoming gangster film) and Dharma Productions," mid-day quoted a source as saying.

Priyanka, who is also a producer, has also been approached for several "filmmaking collaborations," the source added. The other things on Priyanka's check-list for this India visit are magazine shoots, endorsements and the promotional strategy for her Sikkimese film Pahuna, the source told mid-day.

Promoted
Listen to the latest songs, only on JioSaavn.com
Priyanka Chopra's latest venture in American television is a series inspired by the life of Bollywood star Madhuri Dixit, which the Bajirao Mastani actress will produce. ABC Studios will co-produce the show with Mark Gordon Company. Both production houses are executive producers of Priyanka's television debut show Quantico, which will soon premiere its third season. Sri Rao of General Hospital: Night Shift will write the pilot episode of the series.

Priyanka, who was last seen in Baywatch (her Hollywood debut), has completed filming her portion in two other Hollywood films - Isn't It Romantic? and A Kid Like Jake.