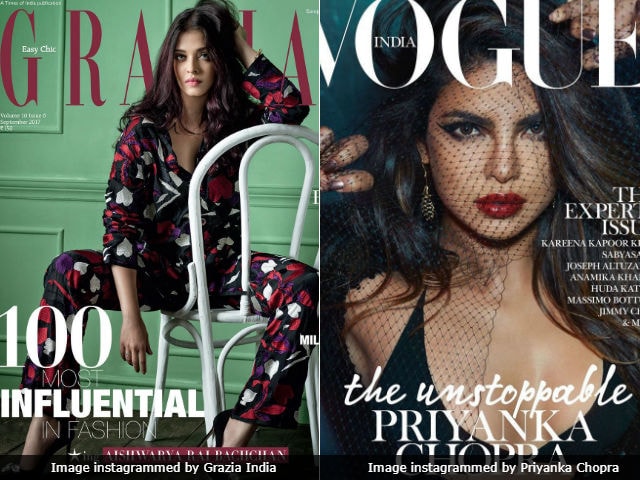 New Delhi: The 'influential fashionista' Aishwarya Rai Bachchan and 'unstoppable' Priyanka Chopra are topping trends list like never before. Aishwarya Rai Bachchan has covered the September issue of Grazia magazine, which lists the 100 most influential in fashion with the former Miss World on top. Likewise, Priyanka Chopra features on the cover of Vogue, which calls her 'unstoppable.' First up, Aishwarya. the Ae Dil Hai Mushkil actress rocked a Sanchita suit paired with Jimmy Choo heels and Confluence accessories. Like wow. The ease with which Aishwarya Rai, 43, pulls off any look inspires many to dare their fashion sensibilities. Take a look at Aishwarya's photoshoot here:

Grazia's issue will talk about Aishwarya Rai Bachchan as the "myth, legend, mother, actor, star, wife, girl-next-door and red carpet queen." Aishwarya Rai is truly all of that. Aishwarya looks phenomenal effortlessly. She's a hand-on mother to her five-year-old daughter Aaradhya and of course, her red carpet appearances are always much awaited - example Cannes Film Festival.

Aishwarya Rai Bachchan returned to films after a sabbatical in 2015 film Jazbaa. In the Sanjay Gupta-directed film, she played the role of a lawyer and a mother, who is desperate to ensure her child's safety. The same year, she featured in Sarbjit, in which she transformed drastically to play the role of Dalbir Kaur. Her last film was Karan Johar's Ae Dil Hai Mushkil, in which she looked close to this:

Now, Priyanka Chopra. Vogue described her as 'unstoppable' and the 35-year-old actress added a few more adjectives while sharing the picture on Instagram: "Unstoppable. Unruly. Unconstrained. Call it what you like. It is what it is"

Unstoppable. Unruly. Unconstrained. Call it what you like. It is what it is. Thank you @VOGUEIndia. Always good to see you and to be styled by you @anaitashroffadajania! Until next time....

Looking at state of Priyanka's work diary we couldn't disagree. Priyanka's upcoming projects are Quantico season 3 and an American show on the life of Madhuri Dixit which she produces. Priyanka will also be seen in two Hollywood films A Kid Like Jake and isn't it Romantic?. As of now, Priyanka Chopra is all set to attend the Toronto Film Festival with her mother Madhu Chopra, where there Sikkimese production Pahuna is awaiting a world premiere.

Promoted
Listen to the latest songs, only on JioSaavn.com
Madhu Chopra also told news agency PTI that Priyanka is so busy this year that she cannot commit to do a Bollywood film - including Sanjay Leela Bhansali's Gustakhiyan, a biopic on Amrita Pritam.