"Never Have I Ever": Alaya Furniturewalla Takes Up ROFL TikTok Challenge

Earlier, Alaya had taken up the "who's most likely to" challenge with mom Pooja Bedi and brother Omar 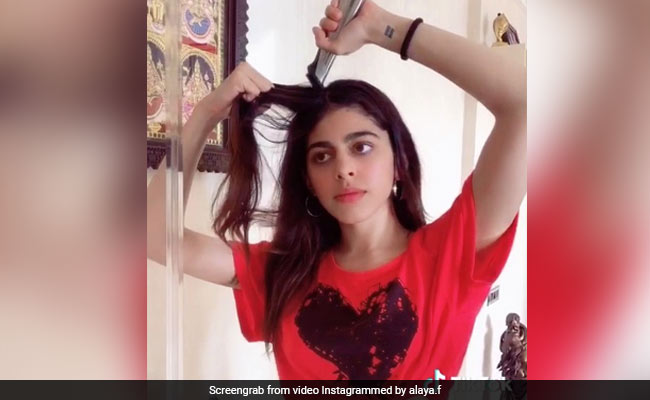 Alaya Furniturewalla's TikTok videos are just too much fun. The 22-year-old actress never fails to crack up her Instafam with hilarious TikTok videos featuring herself. On Tuesday, Alaya dropped another TikTok challenge video on her Instagram profile and it is making her Instafam ROFL. In the latest video, Alaya took up the "never have I ever" challenge and the results are hilarious. In the video, Alaya can be seen doing the activities that are said in the video - from talking to stuffed toys to getting drunk to finishing a series in one day. In the video, Alaya can be seen dressed in a red t-shirt and a pair of shorts as she hilariously acts out the activities. "Never have I ever," Alaya captioned the video and dropped a laughter emoticon. Take a look:

Alaya, who is currently at home with her mother Pooja Bedi and brother Omar, keeps sharing snippets of their family time on her Instagram profile. A few days ago, Alaya trended a great deal for taking up the "who's most likely to" challenge with Pooja and Omar. "As promised, one more who's most likely to with my mother and brother," wrote Alaya.

Earlier, Alaya, Pooja and Omar had taken up another "who's most likely to" challenge on TikTok and the results were hilarious. " Had to do this with my mother and brother," wrote Alaya. Take a look:

Had to do this with my mother and brother @poojabediofficial @_omar.f_ I hope you enjoy this #whosmostlikelyto because there are two more coming your way TikTok- AlayaF

On the work front, Alaya made her Bollywood debut with the 2020 comedy-drama Jawaani Jaaneman where she shared screen space with Saif Ali Khan.