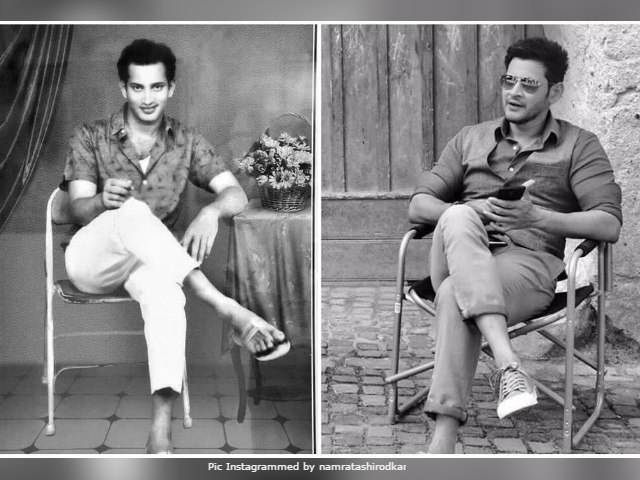 New Delhi: It's not Throwback Thursday yet, and probably that's why we only get half a blast from the past on actress Namrata Shirodkar's Instagram. Wednesday morning, the actress posted a picture featuring juxtaposed photographs of her husband, Telugu star Mahesh Babu, and father-in-law - celebrated Telugu cinema veteran Krishna. Both Mahesh Babu and the younger version of his father are seated with similar poise in the two separate photographs (edited together) and their striking resemblance is guaranteed to make you do a double take. "Then and now. My legendary father in law and his dapper son," is how Namrata captioned the picture. Fans and followers could not agree more and have flooded the post with comments like "epic", "superstars" and "ditto."

This will make fans of Mahesh Babu very, very happy.

Just the previous post on Namrata's Instagram reveals Mahesh Babu's photograph in its entirety - it's a recent one from the sets of his upcoming movie SPYDER. A hilarious caption accompanied the picture - "Mahesh with his fan" - courtesy Mahesh Babu's actress wife.

Mahesh with his fan #SPYderonSeptember27th

Namrata Shirodkar and Mahesh Babu married in 2005 and are parents to two children - son Gautam and daughter Sitara. Mahesh Babu have had a very busy schedule while filming SPYDERwhen he was often visited on sets by Namrata and Sitara.

Candid moments !! @sivan_santosh I never even know ur clicking !! Simply the best on sets @spyderthemovie_