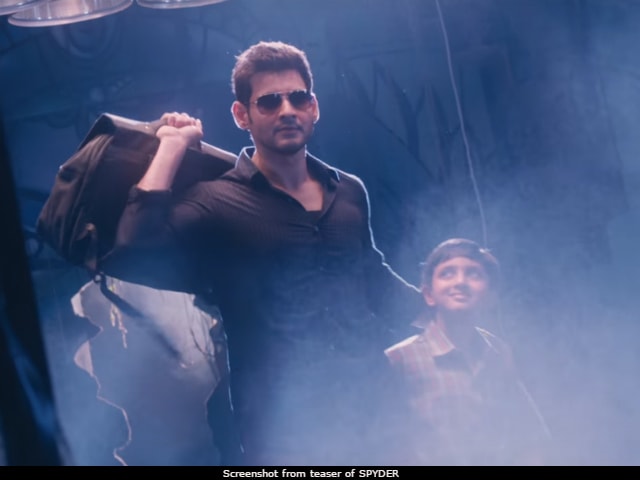 New Delhi: SPYDER alert! A new teaser of upcoming A R Murugadoss thriller SPYDER was unveiled on Wednesday morning (a little ahead of the expected time), which also coincides with Telugu star Mahesh Babu's birthday. Fans and followers are thrilled to see Mahesh Babu as an intelligence officer in the film and simple can't keep calm on Twitter. "Expectations are sky high now," read a tweet while another added: "Prince is looking as charming as ever." Birthday wishes also poured in for the 41-year-old actor making '#HBDMaheshBabu' and '#SpyderTeaser' top the trends' list. The director has revealed the Telugu version of the teaser just yet, which has been reviewed as 'rocking' and 'awesome' on Twitter. There were also shout-outs for Mahesh Babu's co-star Rakul Preet Singh: "It's good to see Rakul. You looking so, so cute," wrote one user.

Meanwhile, the teaser of SPYDER elaborates on the character played by Mahesh Babu. He's mostly busy saving the world from technological evil but also fights, romances and solves mysteries in style. Rakul Preet Singh makes a brief appearance in the teaser - her first ever for SPYDER's promotional material. And oh, don't miss the masked villain in the teaser.

However, many of us were expecting to see the technologically advanced accomplice of Mahesh Babu's feisty character in the teaser but the makers decided otherwise. A robotic spider is actually what helps Mahesh Babu with all his secret missions - a glimpse of which was in the first teaser of the film.

Meanwhile, Rakul is happy to have been cast in a film starring Mahesh Babu and helmed by A R Murugadoss. SPYDER has been rescheduled to hit screens on September 27.
Comments
SPYDER teaserMahesh Babu