SPYDER Teaser: Mahesh Babu's Film Gets A Thumbs Up From Baahubali Director

SPYDER Teaser: The movie is actually named after a technologically advanced aide of Mahesh Babu's character - a robot spider 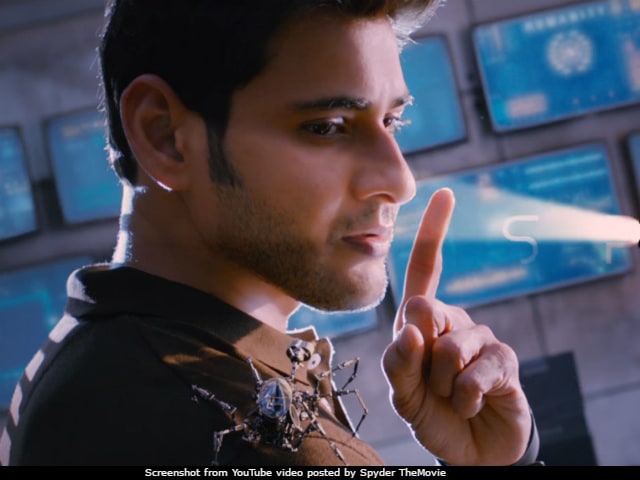 SPYDER Teaser: Mahesh Babu in a still from the movie (courtesy XYZ)

New Delhi: The first teaser of South star Mahesh Babu's much talked about SPYDERwas unveiled on Thursday morning and Twitter is delighted. '#GlimpseOfSPYDER' started featuring as one of the top trends on Twitter. Mahesh Babu stars as an intelligence officer in the A R Murugadoss-directed thriller, which casts Rakul Preet Singh as a medical student. The movie is actually named after a technologically advanced aide of Mahesh Babu's character - a robot spider. The viewers might be taken by surprise as the electronic creature, who appears to have fetched information for the master, crawls on to the actor's shoulders in absolute stealth mode. The SPYDER places himself safely, watching over everything.

Now we understand why it is SPYDER..
Very intriguing..
for the glimpse... https://t.co/Sg5OSw0n3p

The first look of Mahesh Babu in SPYDER was released in April, in which he featured in both crisp formals and as a casually dressed cop.

Watch the Glimpse of SPYDER here:

Promoted
Listen to the latest songs, only on JioSaavn.com
Meanwhile, Rakul is happy to have been cast in a film starring Mahesh Babu and helmed by A R Murugadoss. "A R Murugadoss tops the list of directors I always wanted to work with. He is a very sensible director He makes commercial films and yet every film gives out a message directly or indirectly. He makes wholesome cinema with a mix of commercial and social elements and at the same time keeps audiences at the edge of their seats in thrilling anticipation. Mahesh Babu is the biggest superstar in South. Both coming together for me in this one project is the best thing that could happen for me," she told iflickz.

SPYDER has been rescheduled to hit screens on August 11.

Gangaur 2021: Today Is Gangaur, Know All About The Festival