Bhediya will feature Varun Dhawan and Kriti Sanon as leads 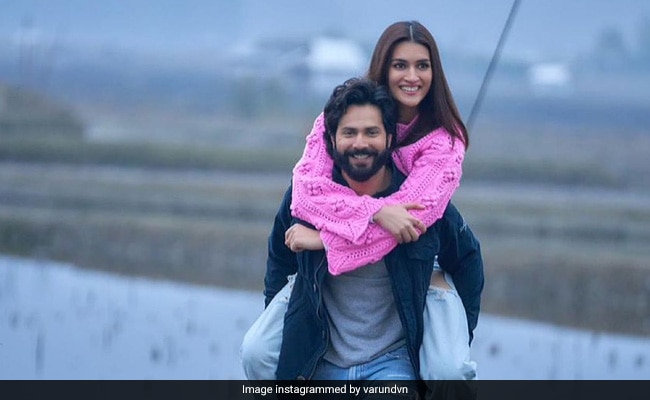 It's a wrap for Kriti Sanon  as the actress finished shooting for her upcoming film Bhediya in Arunachal Pradesh on Monday. Varun Dhawan, who will share screen space with Kriti in the movie, has bid goodbye to her on social media. Varun posted two pictures with Kriti on Instagram and wrote a farewell note for her. In the first picture, Varun can be seen giving a piggyback ride to Kriti, the second photo features both the actors sitting together on the ground.

In his note, Varun Dhawan shared that he had fun with his co-star Kriti on the sets and he will miss her. Varun also bid goodbye to Ziro, a town in Arunachal Pradesh where the Bhediya team was shooting for over a month. Varun borrowed a line from Govinda's song Kya Lagti Hai Haaye Rabba for his caption and wrote, "...Bahut mazaa aaya aapke saath...Kriti Sanon...#wolfpack. It's a schedule wrap for Kriti on #BHEDIYA as we say bye to Ziro. Will miss you both.

Kriti Sanon also shared these pictures on her Instagram handle. In her caption, Kriti spoke about her friendship with Varun Dhawan over the years. The actress shared that both of them have come a long way from their first film Dilwale in 2015 to their upcoming movie Bhediya. Kriti added that she will miss her co-star Varun Dhawan, director Amar Kaushik and the entire team of Bhediya. Just like Varun, the actress also bid goodbye to their shoot location.

She wrote, "And it's a schedule wrap for me in Ziro for #BHEDIYA! From Dilwale to Bhediya and all the years of friendship in between, we've come a long way...Varun Dhawan. Gonna miss you, the captain of our pack Amar Kaushik and the entire Wolfpack. See you guys soon! And bye-bye Ziro!"

For those of you who don't know, Kriti Sanon has previously worked with Varun Dhawan in Dilwale (2015) and Kalank (2019). In Dilwale, Kriti Sanon and Varun Dhawan were cast as second leads. Shah Rukh Khan and Kajol were the main leads in the 2015 movie. In Kalank, Kriti made a special appearance in a song titled Aira Gaira opposite Varun Dhawan and Aditya Roy Kapur.

Coming back toBhediya, the film is scheduled to hit the screens on April 14, 2022.