"Can't believe you did that to her," Kriti Sanon wrote Have you ever felt disappointed when you were eagerly waiting to have a piece of cake, you opened your mouth to eat it, but it was fed to someone else standing beside you? If you relate to the feeling, then Kriti Sanon's latest Instagram post is definitely for you. Kriti, who is currently shooting for Amar Kaushik's upcoming film Bhediya in Arunachal Pradesh, recently celebrated the birthday of a little girl with her co-star Varun Dhawan. The actress posted a hilarious video of the celebration on her Instagram handle. The ROFL video is making Kriti laugh. We bet, it will make you laugh out loud as well.

The video which appears to have been recorded by Kriti Sanon features her co-star Varun Dhawan. In the video, the Badlapur actor can be seen cutting a birthday cake while the little kid and her father stand beside him. As soon as Varun takes out a piece, the baby gets excited. However, Varun feeds it to the little girl's father instead of her. The munchkin, who can be seen opening her mouth to have the cake, is left disappointed at the end. Her expressions are the highlights of the video, as the song Kya Se Kya Ho Gaya from the 1965 film Guide plays in the background.

While Kriti's video is a treat to watch, her caption also deserves your attention. Kriti wrote, "This might make your day. We all have been there, haven't we?" The actress also shared that she "can't believe" Varun did that to the kid. "P.S. can't believe you did that to her...Varun," she added.

Varun also shared the clip on his Instagram handle and apologised to the little girl. He wrote, "Beti ka birthday, banaya baap ne (It was the daughter's birthday, but her father celebrated it)...I am sorry."

Later, Varun shared his post on his Instagram story and wrote, "Kriti Sanon, I can't believe you." 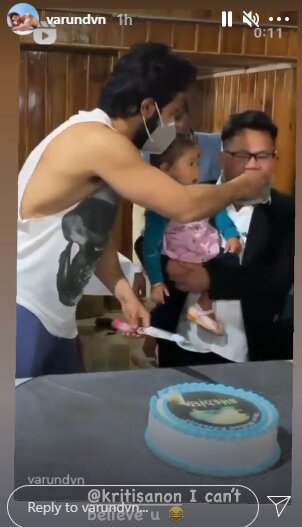 Celebrities such as Anushka Sharma, Esha Gupta, Tahira Kashyap and Shashank Khaitan reacted to the video.

Coming back to Bhediya, the film marks the second collaboration of Kriti Sanon and Varun Dhawan as leads after Dilwale (2015). Varun also shared screen space with Kriti in Aira Gaira, a song that was featured in the 2019 film Kalank.