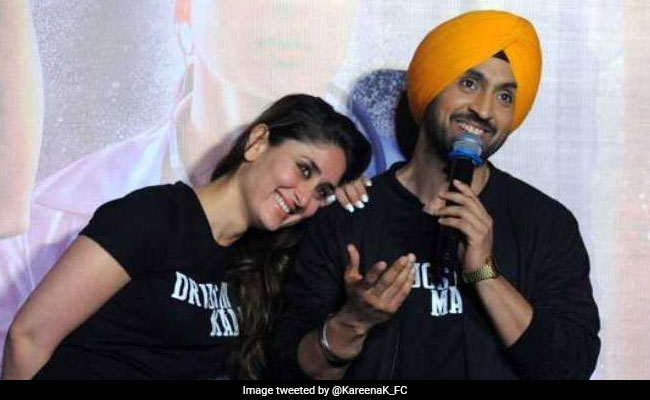 Kareena and Diljit during the promotions of Udta Punjab. (Image courtesy: KareenaK_FC)

Diljit Dosanjh can't keep calm. The singer, who released his new music video Kylie+ Kareena on Sunday, got a big shout out from Kareena Kapoor ahead of the song's release. Diljit, a self-confessed Kareena Kapoor fan has worked with the actress in Udta Punjab and the work-in-progress film Good News. On Saturday, the singer-turned-actor shared a special video on his Instagram profile, in which Kareena could be seen wishing the actor luck. In the video, Kareena praised Diljit and said, "Mai aapki bohot badi fan hun." The Omkara actress added, "I am really humbled that Diljit has sung this song which has my name in it. I definitely know ke do picture ki hain Diljit ke saath ... Zyada baat nahi karta hai woh but that's what I like about him. But he has expressed his feelings and his love for me through this song. I just want to say that he is a fan of mine but after doing two films with Diljit, main apse ye kehna chahti hun ki main aapki bohot badi fan hun. Thank you for this honour and I wish you all the best for the song."

An excited Diljit shared the video on his Instagram profile and he captioned it: "Oh my God... Queen herself. Best co-star I have ever worked with and an amazing human being." Take a look at Diljit's post here:

The song which hit the social media on Sunday received over 1 lakh views on YouTube within a few hours. Check out the song Kylie+ Kareena here:

Diljit Dosanjh became a household name after he sang songs like Proper Patola, Do You Know and Patiala Peg among others. He has also featured in several Punjabi films.

Diljit has also starred in Bollywood films like Phillauri, co-starring Anushka Sharma, Soorma alongside Taapsee Pannu and Welcome To New York, co-starring Sonakshi Sinha among others. His next film is Arjun Patiala, alongside Kriti Sanon.