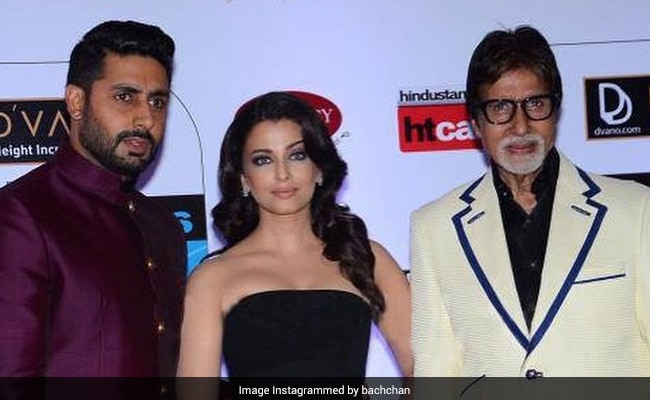 A file photo of Big B with Aishwarya and Abhishek Bachchan. (courtesy bachchan)

Amitabh Bachchan, his son Abhishek and daughter-in-law Aishwarya Rai Bachchan, who are currently being treated for COVID-19 in Mumbai's Nanavati Hospital, are responding well, hospital sources told news agency PTI on Saturday. "They all are ok. They are responding well to the treatment. They are in the isolation ward. Amitabh Bachchan and Abhishek Bachchan will be in the hospital maybe for a day or two," PTI quoted the source as saying. Aishwarya Rai Bachchan, who tested positive some days ago and had been in self-isolation at the Bachchan residence Jalsa, was moved to the hospital on Friday. Jalsa and the other three bungalows owned by the Bachchans have been sealed by the Brihanmumbai Corporation. "Aishwarya had cough. She is ok now," the hospital source told PTI.

Meanwhile, Big B has been actively sharing updates through his Twitter profile. He began the week by thanking healthcare workers. Later, he shared a set of posts acknowledging his fans and well-wishers. On Friday night, keeping up with the "hospital's restrictive protocol," Big B shared a tweet, that read, "In happy times , in times of illness, you our near and dear, our well-wishers, our fans have ever given us unstinting love , affection care and prayer .. We express our bountiful gracious gratitude to you all .. in these circumstances hospital protocol, restrictive."

pristine white their layered dress ; dedicated to serve they be ; god like incarnations they ; companions of the sufferer they ; erased they their ego have ; to us they have embraced in care ; they be the divine destination ; they fly the flags of humanity ... pic.twitter.com/kTlROPIn4u

Apart from the Bachchans' properties, actress Rekha's bungalow has also been sealed by the BMC after her security staff was found to be infected. Actor Aamir Khan and producers Karan Johar and Boney Kapoor previously announced that members of their staff had tested positive. Several TV stars recently announced that they had got the virus as well.