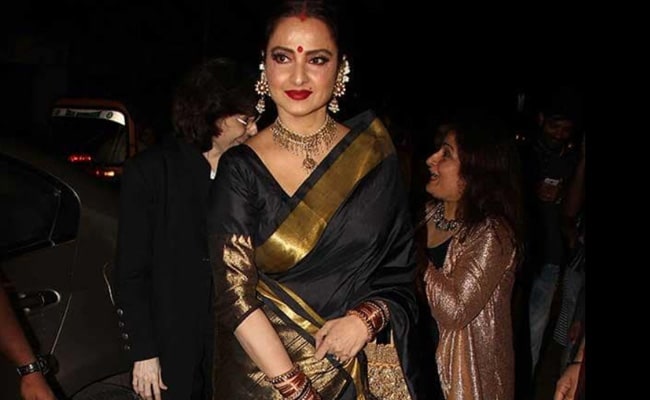 Rekha photographed at an event in Mumbai.

Veteran actress Rekha's bungalow in Bandra, Mumbai, has been sealed by the Brihanmumbai Municipal Corporation (BMC) after her security guard tested positive for coronavirus, reported news agency PTI. The BMC has also put a board outside the premises declaring the place as a containment area. The security guard at Rekha's house - Sea Spring - tested positive for the virus on Tuesday and he has been hospitalised at the BMC's COVID-19 care facility in Bandra Kurla Complex since then, a civic official said on Sunday, reported PTI. He added that BMC has sealed only a portion of the bungalow, which is standalone, reported PTI.

Rekha is the latest Bollywood celebrity whose staff has been diagnosed with COVID-19 after Aamir Khan, Boney and Janhvi Kapoor and Karan Johar.

On Saturday, veteran actor Amitabh Bachchan and his son, actor Abhishek Bachchan, also tested positive for coronavirus. The duo, who have been experiencing "mild symptoms," are currently admitted to Nanavati Super Specialty Hospital in Mumbai.

Coming back to Rekha, the actress in best-known for her performances in films such as Umrao Jaan (1981), for which she even won the National Film Award for Best Actress, Khubsoorat (1980), Ghar, Judaai, Mujhe Insaaf Chahiye, Khoon Bhari Maang, Khiladiyon Ka Khiladi and Silsila, in which she co-starred with Amitabh Bachchan.

The actress was last seen in R Balki-directed Shamitabh, which released in 2015. After that, she featured in a special appearance in Yamla Pagla Deewana: Phir Se's track Rafta Rafta Medley.

Rekha has not announced her next project yet.