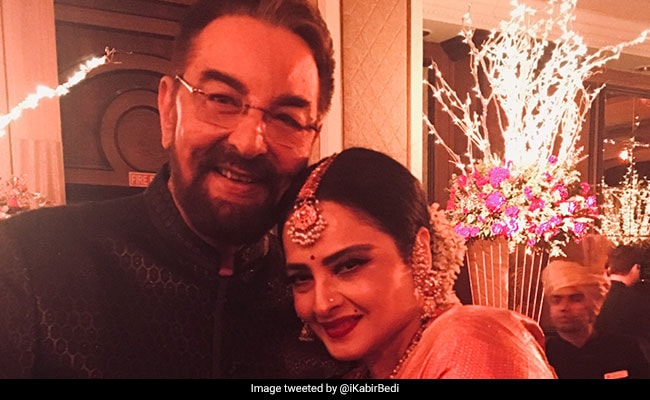 Take a look at the pictures shared by Kabir Bedi:

TOGETHER WITH REKHA after a long time, at @priyankachopra and @nickjonas's beautiful wedding reception, bringing back memories of "Khoon Bhari Maang". She's one of Bollywood's great icons. pic.twitter.com/0ZZeg8plku

Several other Bollywood celebrities, who attended Priyanka Chopra and Nick Jonas' star studded wedding reception also shared inside photos on social media. Ranveer Singh delighted his fans with a picture of himself with Govinda.

Dia Mirza shared also shared a picture with the "girl squad' at the reception. "Celebrating the newlyweds Priyanka Chopra and Nick Jonas. Wish you both a lifetime of fun, shared growth and happiness. Love, love and more love," read Dia's caption for her picture with actresses Swara Bhasker, Diana Penty, Vaani Kapoor and Sophie Choudry.

Celebrating the newlyweds @priyankachopra and @nickjonas Wish you both a lifetime of fun, shared growth and happiness love love and more love!!! The #GirlSquad @reallyswara @dianapenty @_vaanikapoor_ @sophiechoudry

Actress Urmila Matondkar, Kajol and music composer AR Rahman also treated us to some inside photos from the party.

A post shared by Urmila Matondkar (@urmilamatondkarofficial) on Dec 21, 2018 at 6:28pm PST

Priyanka Chopra married Nick Jonas in Jodhpur's Umaid Bhawan Palace earlier this month. Priyanka and Nick had two wedding ceremonies - a Christian wedding as scheduled for December 1 while the Hindu wedding took place on December 2. The wedding was attended by family members and close friends.