2020 Recap: The Bachchans To Tom Hanks, These Celebs Beat COVID-19 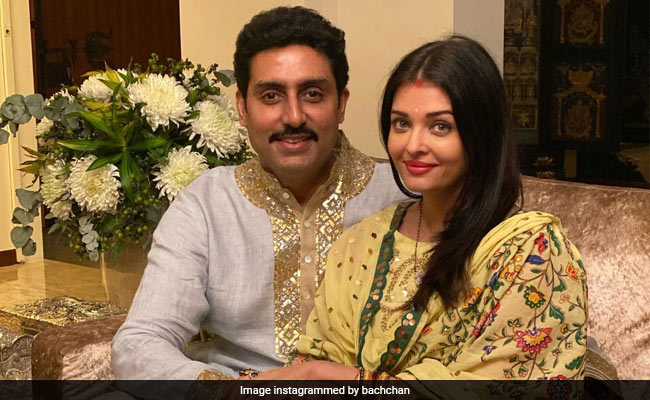 Abhishek and Aishwarya contracted the virus in July. (courtesy: bachchan)

Let's face it, 2020 has been anything but a great year. While we are thankful for the COVID-19 vaccines, spending quality time with our families, and some level of self-introspection, we clearly would not like to see a lot of things again. Beginning with the coronavirus of course, the condition of migrant workers and losing some of our favourite celebrities, 2020 wasn't very kind and we hope the next year touches our lives like a breath of fresh (and disinfectant) air. We choose to look back at the times when man won over the virus. Here's a list of celebrities across different entertainment industries who beat the virus and how.

Four members of Bollywood's Bachchan family - Amitabh Bachchan, Abhishek Bachchan, Aishwarya Rai Bachchan and Big B's 9-year-old granddaughter announced in July that they had contracted the virus. The family stayed in Mumbai's Nanavati Hospital until their recovery. Amitabh Bachchan, during his stay at the hospital thanked his EF every day without a miss, while fan boy Abhishek received a special letter from Cesar Azpilicueta, captain of the Premier League club Chelsea. Aishwarya Rai Bachchan, after being discharged from the hospital, thanked her fans writing she is "forever indebted". Another veteran to have contracted the virus was Neetu Kapoor, who tested positive while shooting for her film Jug Jugg Jiyo, so did her co-star Varun Dhawan.

When the lockdown was a bit eased, celebrities like Malaika Arora, Arjun Kapoor, Kriti Sanon were spotted shooting for their respective projects, keeping in mind the necessary precautions. Malaika Arora, in one of her posts, shared a picture of her son Arhaan and her pet pooch Casper separated by a wall. "Love knows no boundaries," she wrote.

Hollywood veteran Tom Hanks and his wife Rita Wilson were in Australia, when they contracted the virus in March. Tom Hanks was the first star to be infected by the virus. During quarantine, the actor found respite in the world of social media. He tweeted about ways of eating vegemite, rummy lessons ( he always lost in the game of cards with Rita Wilson). He even resumed basic chores like "folding laundry and doing dishes." They were in Australia for a new biopic on Elvis Presley, in which the actor was cast as the Elvis' manager. After completing their quarantine and testing negative, the couple returned to the US. In an interview in July with NDTV's Rohit Khilnani, the actor said, "My experience with COVID-19 has been like everyone else's except for the first week or so where we were positive." The same month, Idris Elba and his wife Sabrina tested positive for the virus. The actor was photographed with Justin Trudeau's wife Sophie at a public event day before contracting the virus. (she had also tested positive then).

In the latter half of the year, there were reports of Batman star Robert Pattinson testing positive. The Batman's production, which was taking place in UK, was suspended in March due to the pandemic. It was halted again in September after a member of the film (reported to be Robert Pattinson) contracted the virus. TV stars Neil Patrick Harris, Jim Parsons and Game Of Thrones actor Kristofer Hivju also contracted the virus.

Baahubali actress Tamannaah Bhatia was admitted to a hospital after she tested positive for coronavirus. A few months after her recovery, she resumed shooting for her projects. Tamannaah's parents had also tested positive for COVID-19 earlier this year. The actress, in an Instagram post, gave a shout out to healthcare workers. "I was so sick, weak and scared but then you made sure that I was comfortable and treated in the best possible way. The kindness, sincere caring, and concern made everything better," read an excerpt from her post.

Prithviraj Sukumaran, who was shooting for his film Jana Gana Mana, contracted the virus and he was "asymptomatic." Baahubali director SS Rajamouli had tested positive for COVID-19 a few months ago. The director is fine now and is shooting for his next film RRR. Late actor Chiranjeevi Sarja's wife Meghana Raj along with her parents and infant son tested positive for coronavirus.

Kasautii Zindagii Kay actor Parth Samthaan tested positive for COVID-19 in July. The actor was busy shooting for his show while he contracted the virus. "The BMC has regularly been in touch and with the doctors' guidance, I am in self-quarantine and I am grateful to them for all their support," the actor wrote in his post. TV star Shweta Tiwari too had tested positive. After her quarantine and recovery, the actress celebrated her low-key 40th birthday by spending quality time with her daughter Palak, who will soon make her Bollywood debut. She posted pictures from her post-COVID birthday celebrations.

While Shweta Tiwari's Mere Dad Ki Dulhan co-star Varun Badola tested negative, his wife and National Award winning actress Rajeshwari Sachdeva contracted the virus. Veteran actress Himani Shivpuri, who has also starred in movies, was admitted to a hospital after she tested positive. After being discharged from the hospital, she wrote: "A big thank you to our Covid warriors - the hospital staff. Am back in home quarantine! Thank you all for your positive wishes." TV stars Shrenu Parikh, Sara Khan, Prince Narula had also tested positive.

Singer Kanika Kapoor was the first singer to have contracted the virus. She was also found at a party a few days before she tested positive. Rapper-singer Raftaar was also diagnosed with coronavirus. The singer who was asymptomatic, said in his post, "I am waiting for my next COVID-19 test as I feel there's a technical error because I'm fit and fine. I am not feeling unwell and I don't think I have the disease because I don't have any symptoms." Other members from the music industry who had coronavirus, were singer-actress Charlotte Lawrence and Pink.

Here's to everyone who battled COVID-19. See you in a happier and hopefully healthier 2021.