Read inOther Languages
This Article is From Nov 16, 2019 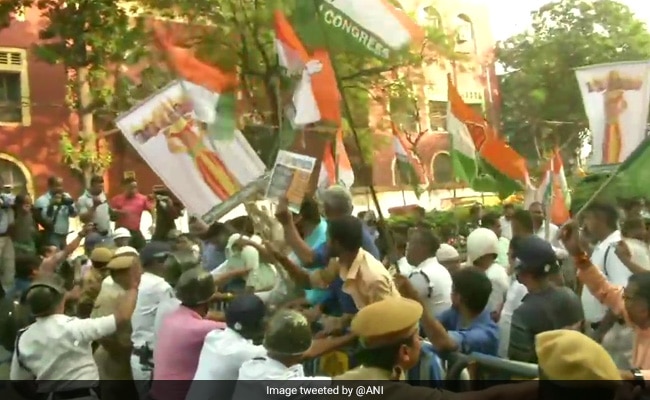 The Congress workers engaged in a scuffle with the police on Saturday during a counter rally against BJP demonstration outside their party headquarters in Kolkata on the Rafale issue, police said.

Earlier in the day, BJP youth activists held a protest rally outside the West Bengal Congress headquarters here demanding an "apology" from the grand old party and its leader Rahul Gandhi for spreading "lies" on the Rafale issue that was rejected by the Supreme Court.

The BJYM activists also demanded an apology from Mr Gandhi.

The rally was part of the BJP's countrywide stir to seek Rahul Gandhi's apology on the Rafale issue.

Angry Congress workers alleged that the agitation was undemocratic and launched a counter rally in central Kolkata outside the state BJP headquarters.

Police barricaded the area outside the BJP office to avoid any untoward incident.

Policemen tried to pacify the Congress protesters but they refused to budge and burnt effigies of Prime Minister Narendra Modi.

Later on when they tried to move towards the BJP office, a scuffle between police and Congress activists ensued, following which rotten eggs and ink were thrown at the police.

During the 2019 Lok Sabha election campaign, the Congress had time and again raised the issue of Rafale deal.

The Supreme Court had on Thursday given clean chit to the Modi government over the purchase of 36 fully loaded Rafale fighter jets from French company Dassault Aviation, rejecting the plea for registration of an FIR by the CBI for alleged commission of cognisable offence in the deal.

The top court rejected the pleas seeking review of the December 14, 2018 verdict in which it had said that there was no occasion to doubt the decision-making process in the procurement of 36 Rafale fighter jets.