RRB Group D result: The Railways has released the result on the official websites affiliated with the Railway Recruitment Boards. 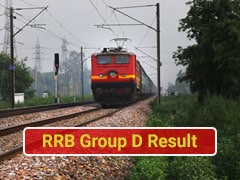 RRBs of Indian Railways kicked off the CBT or Computer-Based Test for the recruitment for more than 60,000 RRB Group D posts on September 17 last year. These recruitment examinations for which the RRB Group D result is expected were organised in various shifts in different centres across the country till December 17.

RRB Group D result will be released today on the official websites. According to an official Indian Railways statement, the results will be released by 3.00 pm today. #RRBGroupDResult#RRBresultpic.twitter.com/rVFToyC1Vb

The candidates will be able to access the RRB Group D result from a PDF file which will be released online. The normalised marks and shortlisting status for PET of every candidate can be downloaded by entering their registration details after the results declaration.

Read: RRB Group D Result 2019: Use These Simple Options To Check Your Result

Details about the RRB Group D result and other updates can be found from these links of various RRB websites:

According to Indian Railways, an estimated 3 to 4 lakh candidates appeared for the examination every day and the average attendance in the exam was 60%.

The exams were conducted in various shifts in exam centres spread across the country.

RRBs had also completed first stage CBT for 47.56 lakh candidates for ALP and Technician posts from August 9 to September 4, 2018. The results for this RRB ALP recruitment was released last month.

Some of the RRBs have released the results and cutoff on their homepages. Check them here: