In a letter to Federation of Western India Cine Employees president, Mika Singh urged Mr Tiwari to give some extra time before taking any legal action against him over the matter. 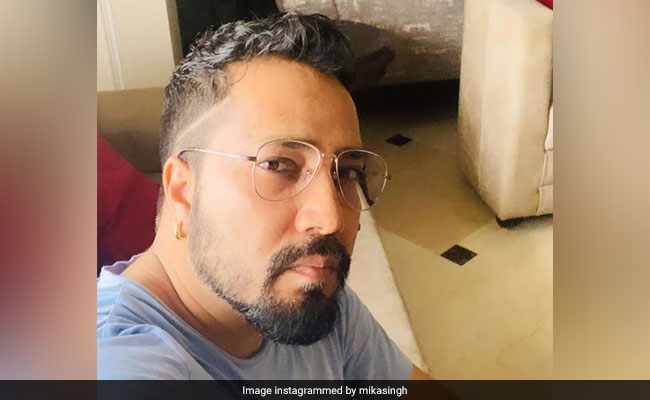 Singer Mika Singh today got some relief after the Federation of Western India Cine Employees (FWICE) president BN Tiwari accepted his demand for some time to clarify his stand on his performance in Pakistan.

The singer shared a video on his Twitter handle where the FWICE president is speaking about the letter in which Mika has requested the film body to hear him in the matter before an opinion is made about him.

"As the contents of the letter state that Mika is ready to accept the decision made by the federation and he has openly apologised for his actions, so the committee has decided to conduct a meeting with the singer on Tuesday," Mr Tiwari said.

In the letter to FWICE, ''Mauja Hi Mauja'' singer urged Mr Tiwari to give some extra time before taking any legal action against him over the matter.

"I would request everyone and the association to wait for my official press conference which I will conduct after taking the association in confidence and prove that what I have done was not intended to hurt any of my fellow Indians. I humbly request not to take any actions against me till I do my clarification," he wrote.

He even expressed his heartfelt apologies to fellow Indians if he has hurt their sentiments. "If I have hurt any of my fellow Indians knowingly or unknowingly, I humbly apologise to the whole country," the letter read.

Imposing a ban on Mika, FWICE issued a statement on Wednesday boycotting the singer from recording, playback singing, and acting with the entertainment companies. This came after he performed at an event in Karachi, Pakistan.

"We at FWICE, mother body of all 24 crafts of film making, have zero tolerance for such acts and unanimously condemn it as anti-national, unpatriotic and ghastly and totally ban Mika Singh alias Amrik Singh and the 14 crew members who participated in the presentation from any performance, recording, playback singing, acting in India," read the statement issued by FWICE.

"We are deeply pained and anguished by the performance of singer at the wedding of former President of Pakistan Pervez Musharraf''s cousin's daughter in Karachi, followed by the height of tension and broken relations between India and Pakistan, which is shocking, shameful and shattering," read the statement further.

Terming Mika's act as "unbridled greed for money", FWICE wrote, "Since the cultural bridge between India and Pakistan is under siege, his performance sent shivers down the spine of every Indian. Mika Singh's unbridled greed for money over the nation indicates a total non-application of mind and smacks of roguish, mala fide and traumatic intentions."