Independence Day 2020: Rajnath Singh said he welcomes the roadmap set by the Prime Minister for a self-reliant India. 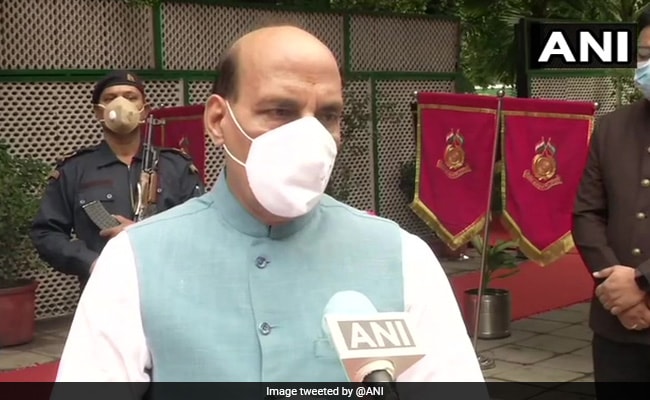 Delivering his seventh straight Independence Day speech, PM Modi said the call for "aatmanirbhar Bharat" (self-reliant India) has captured people's imagination and become a "mantra" for everyone, as he pushed for raising the country's share in the global economy.

PM Modi addressed the nation on the occasion of India's 74th Independence Day from the Red Fort, and asked the citizens to prepare themselves for a self-reliant India.

Lauding the Prime Minister's call, Mr Singh said there may be challenges but there is also the ability to solve all the problems.

"Today, on the occasion of Independence Day, Prime Minister Narendra Modi's address reinforces the resolve of self-reliant India. There may be challenges in this resolution, but there is the ability to solve all the problems within this country," the Defence Minister said in a tweet in Hindi.

Noting that a self-reliant India is necessary for the welfare of the world, Mr Singh said all Indians should have the determination to make the country''s role and contribution in the world impactful.

"Self-reliant India is necessary for the welfare of the world. All Indians should have the determination to make India''s role and contribution in the world impactful. Today, the prime minister has made it clear that the country has the skills and capability on which India can give new direction and momentum to the global economy," he said in another tweet.

Rajnath Singh said he welcomes the roadmap set by the Prime Minister for a self-reliant India.

"The Prime Minister believes that we have to turn the disaster of coronavirus into an opportunity. Today, he has laid a new framework of development in front of the country, due to which the feeling is strengthened that this seemingly impossible task will also be possible. I welcome the roadmap given today for self-reliant India," the Defence Minister said.

"Giving priority to health in India which is facing the coronavirus crisis, the prime minister has announced National Digital Health Mission. With the help of one digital ID, all citizens will be able to get treatment from anywhere. This scheme will bring revolutionary changes in the health sector," he tweeted.

Mr Singh said under the campaign of expansion of the NCC, the Defence Ministry will provide to 1 lakh new cadets at the earliest.

"From the ramparts of the Red Fort, the Prime Minister has announced the expansion of NCC to 173 border and coastal districts of the country. The Ministry of Defence is fully prepared to do this work on a priority basis. Under this campaign, special training will be given to one lakh new NCC cadets at the earliest," he tweeted.