Rahul Gandhi was joined by mother Sonia Gandhi, sister Priyanka Gandhi Vadra, her husband Robert Vadra and their children as he filed his nomination from Amethi.

Rahul Gandhi filed his nomination in Amethi in presence of Sonia Gandhi, Priyanka and Robert Vadra

Congress president Rahul Gandhi rode on the rooftop of a truck, flanked by sister Priyanka Gandhi Vadra, her husband Robert Vadra and her children Raihan and Miraya, as he moved on a narrow road in his constituency Amethi in Uttar Pradesh to file his nomination papers.

The truck moved in slo-mo, wading through a large crowd on the road. People sprayed flower petals on the ensemble cast from their balconies, many training their mobile phone cameras.

Rahul Gandhi was seen intermittently holding up a T-shirt with the logo of his main campaign theme for this election - the NYAY scheme that promises Rs 72,000 a year to India's poorest. At the election office, his mother Sonia Gandhi also joined him. 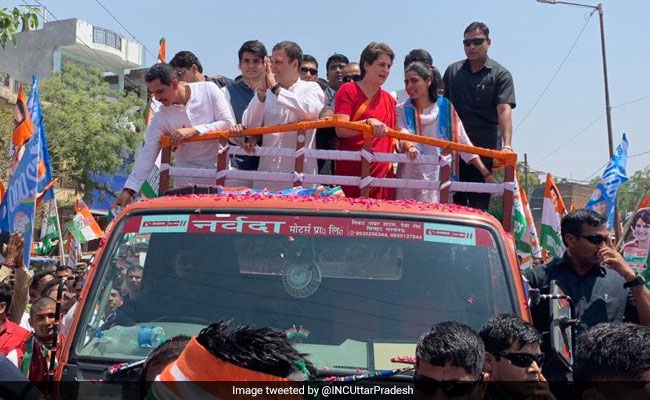 The Gandhi siblings are a familiar sight in Amethi during election season. In fact, many say people of this constituency have had less sightings of their three-time MP Rahul Gandhi, compared to Priyanka Gandhi Vadra, who has been in charge of the campaign for her brother in Amethi for 15 years.

In this national election, Priyanka Gandhi is a Congress General Secretary, and so belongs to many more constituencies where the party is banking on her charm and charisma to draw in votes.

One person probably seen in Amethi more than either of the Gandhis this time is Union Minister Smriti Irani, who is taking on Rahul Gandhi for a second time as the BJP candidate in Amethi.

Smriti Irani lost to Rahul Gandhi in 2014 - a reduced margin was her consolation - but she proved she was, by no means, a bad loser.

She returned to Amethi again and again, every few months, and launched schemes. She was visible and she used each visit to project Rahul Gandhi as an MP who has neglected his constituency.

Her active role in Amethi means winning may no longer be a cakewalk for Rahul Gandhi in a constituency that has been loyal to the Nehru-Gandhi family for several decades.

The Congress President's decision to contest from Kerala's Wayanad - it is the first time he is fighting from two seats - has been portrayed by the BJP as driven by nervousness and insecurity.

The BJP is expected to seize the presence of Robert Vadra today to target the Congress and the Gandhis on corruption. Robert Vadra, a businessman, is being investigated for charges of money laundering.