In UP's Amethi, Smriti Irani To Take On Rahul Gandhi For A Second Time 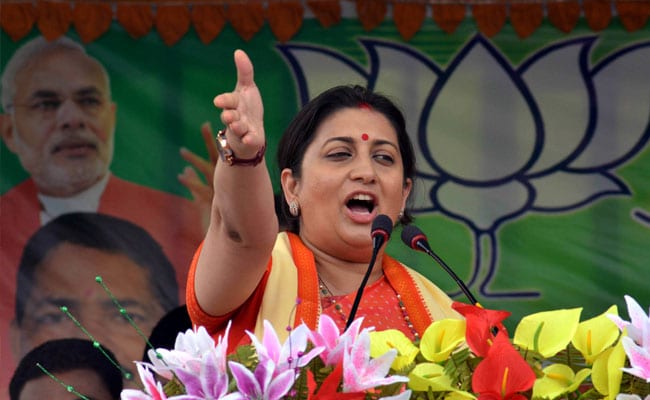 Smriti Irani was named as the candidate from Amethi in BJP candidates list for Lok Sabha polls 2019.

The BJP on Thursday released its first list of candidates for the 2019 Lok Sabha elections, naming Smriti Irani as the party's candidate from Uttar Pradesh's Amethi. A Congress bastion for decades, the listing squarely sets Smriti Irani up for a second fight with party chief Rahul Gandhi.

In the 2014 Lok Sabha elections, the district saw an intense battle between Mr Gandhi and Ms Irani. Though Ms Irani lost to the Congress leader, her entry reduced Rahul Gandhi's victory margin from some 3.70 lakh votes in 2009 to 1.07 lakh in 2014.

"I thank Prime Minister Narendra Modi, chief Amit Shah and all the senior leaders of the party for giving me the responsibility to contest Lok Sabha elections from Amethi. It would be a matter of pride for me to strengthen the BJP in parliament by offering a lotus from Amethi," she tweeted in Hindi.

Congratulations to all the candidates announced by @BJP4India. Let us together work for #PhirEkBaarModiSarkar by ensuring lotus blooms in every constituency.

Besides Ms Irani, the BJP also named 27 other candidates from Uttar Pradesh in the list of 184 contenders for the Lok Sabha elections, now less than three weeks away.

Voting for the Lok Sabha elections will begin on April 11 and continue for over a month till May 19 across seven phases. Amethi will vote on May 6. The results will be declared on on May 23.