Located on the hilly slopes around 25 km from the Bhaderwah town, Sunote village in the middle of a dense cedar forest comprises nearly two dozen houses, including six tribal Gujjar families. 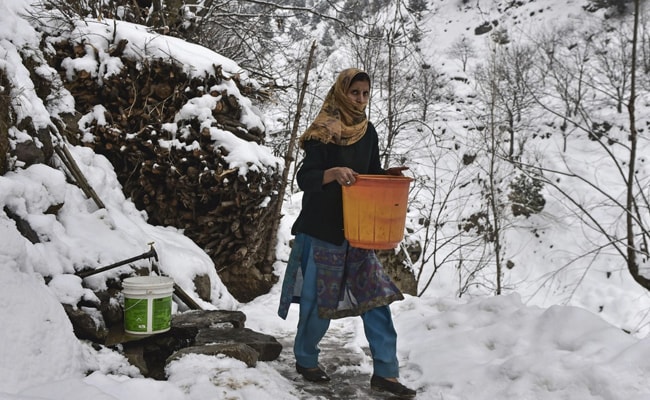 Severe water crisis has gripped a village in Bhaderwah valley in Jammu and Kashmir's Doda district, which is facing the harshest winter in years, freezing water pipelines and forcing residents to travel long distances in search of drinkable water.

Located on the hilly slopes around 25 km from the Bhaderwah town, Sunote village in the middle of a dense cedar forest comprises nearly two dozen houses, including six tribal Gujjar families.

Frozen taps and overground water pipes in the village have forced the residents to travel miles in search of drinkable water in sub-zero temperature.

The women folk of these families, mostly farmers and cattle rearers, have been left with no option but to trek the snow-bound treacherous terrain in groups in search of water.

Sometimes they even boil snow to get water for daily use.

"For the last couple of months, we have been forced to survive under sever water crisis. We keep on moving from dawn to dusk to fetch water amid sub-zero temperature, treacherous conditions and the fear of lurking wild animals," 58-year-old local resident Asha Devi said.

As the night temperature has remained at sub-zero levels for over two months, it had a cascading effect on the water supply lines in remote areas of the Valley like Sunote village.

"Both my knees are injured and I can hardly move but still at this age, I have no option but to trek 2 km everyday with my husband to fetch the water," Begum Bibi (70), an elderly tribal Gujjar lady, said.

Divya Charak, a student of class 12, said her studies are getting affected due to the water shortage as she has to join the elders to look for water.

Executive Engineer PHE division, Doda, Satish Sharma said he is equally concerned about the problems being faced by the people in the absence of drinkable water.

"I will send my team headed by Assistant Executive Engineer there on Monday and will also visit there personally as the issue raised by the villagers is of very serious nature," he said.

He assured drinkable water supply to the village at the earliest.

"We will try and look for other natural resources to tap them for a permanent solution," Sharma said.