"In Case Of Adverse Events...": What Covaxin Consent Form Says

Coronavirus Vaccine: Recipients of Covaxin have to sign a consent form before being vaccinated because its use has been allowed by the government in "clinical trial mode".

Covaxin has been developed by Hyderabad-based Bharat Biotech.

As India's vaccination drive began today with Covid shots to health workers, those receiving Bharat Biotech's Covaxin were asked to sign consent forms that assured compensation if any adverse effect was found linked to the vaccine.

Only recipients of Covaxin have to sign a consent form before being vaccinated because its use has been allowed by the government in "clinical trial mode". Among those who received the shot after signing the form were AIIMS chief Dr Randeep Guleria, vaccine committee chief and NITI Aayog member Dr VK Paul and his wife Dr Shashi Paul, a scientist.

The first person in India to receive the vaccine, Manish Kumar, was also given Covaxin.

The consent form says "COVAXINTM" is being offered under restricted use in an emergency situation and has been permitted in "public interest" as an abundant precaution. It also explains that the clinical efficacy of the vaccine is yet to be established and it is still in Phase 3 trials.

"The Bharat Biotech COVID-19 Vaccine (COVAXINTM) is a vaccine with approval for restricted use in emergency situation that may prevent COVID-19. In phase 1 and phase 2 clinical trials, COVAXINT has demonstrated the ability to produce antibodies against COVID-19. However, the clinical efficacy of COVAXIN is yet to be established and it is still being studied in phase 3 clinical trial. Hence, it is important to appreciate that receiving the vaccine does not mean that other precautions related to Covid-19 need not be followed," the form states.

The recipients are being handed a factsheet and a form to report adverse effects, in which they have to note down symptoms like fever, pain within seven days. 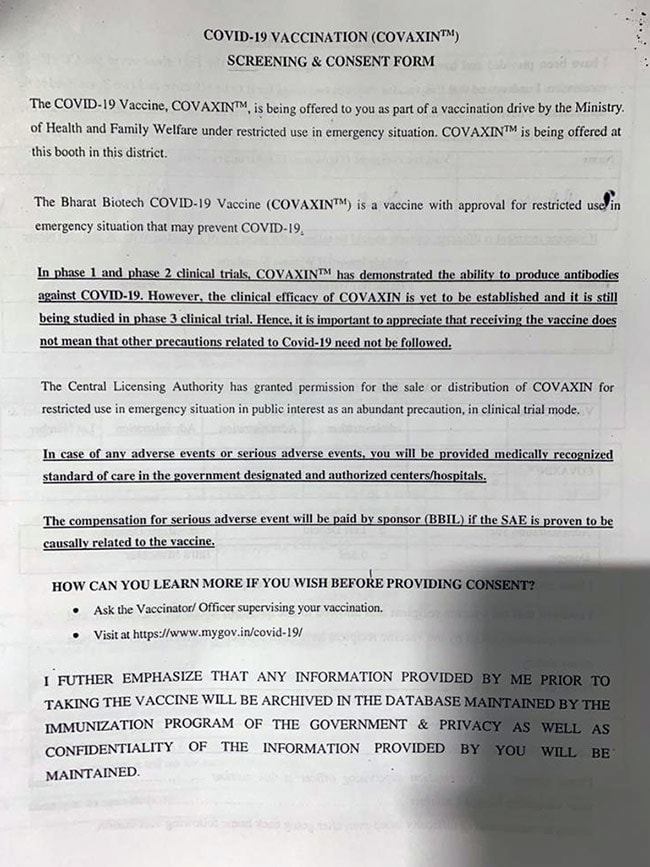 Two-dose vaccines Covaxin and Serum Institute of India (SII)'s Covishield - developed by Oxford-AstraZeneca -- were cleared for emergency use earlier this month and are being administered to crores beginning today.

The clearance to Bharat Biotech's Covaxin, even though it has yet to clear final-stage trials, has been criticized by opposition parties and a section of scientists. Prime Minister Narendra Modi, launching the vaccine drive in the morning, said: "Our scientists and experts were assured about the safety and efficacy of the two Made-in-India vaccines, only then did they allow the emergency use authorization. So stay away from propaganda, rumours, or misinformation."

Recipients will not get to choose which vaccine to take.

Resident doctors at RML demanded they be administered Covishield and not Covaxin since the Serum vaccine has completed all three stages of trials as required. "Covaxin manufactured by Bharat Biotech is being preferred over Covishield manufactured by Serum Institute in our hospital...We would like to bring to your notice that the residents are a bit apprehensive about the lack of complete trial in the case of Covaxin and might not participate in huge numbers thus defeating the purpose of the vaccination," the Resident Doctors Association of the hospital said in a letter to the medical superintendent of the facility.

In a statement, the Indian Medical Association (IMA), had said yesterday that it endorsed the safety and efficacy of both Covaxin and Covishield and added that the "misinformation around vaccines on social sites is unfortunate and more harmful than the disease itself."