4 Jharkhand Villagers Killed In Police Firing During Coal Mine Protest 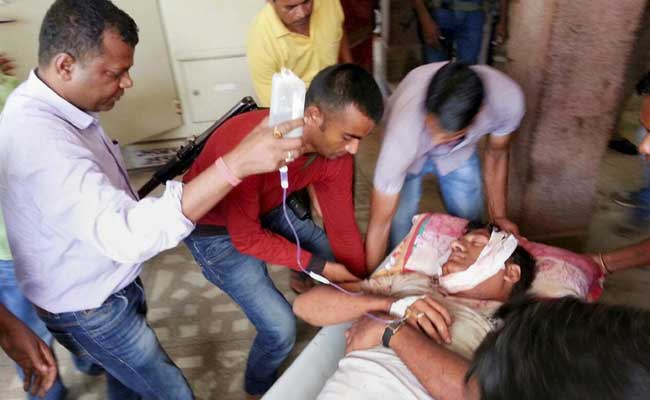 An injured person being taken to a hospital after clashes outside the NTPC Barkagaon site. (PTI photo)

Ranchi: At least four villagers were killed and more than 20 injured in police firing in Jharkhand's Hazaribagh district this morning, an officer said.

"Prohibitory orders were imposed in area. The situation is under control. Additional forces were sent to spot," Inspector General Operation and Police spokesperson MS Bhatia said.

According to Mr Bhatia, the problem began when police took Congress legislator Nirmala Devi from Barkagaon in Hazaribagh into custody.

She has been staging a protest at the National Thermal Power Corporation (NTPC) plant gate for last few days.

At least six policemen were critically injured and two police vehicles torched after which the police opened fire at the villagers.

The ASP was rushed to Ranchi for treatment.

The villagers supported by the opposition parties were protesting against land acquisition and low compensation amount by the NTPC.

Earlier, former Congress MLA of Barkagaon Yogendra Sao fought for the cause of the villagers and later his wife Nirmala Devi, now MLA, supported them.

The NTPC Barkagaon project is facing protest since 2004.

In 2010, coal mines in the area were allocated to the NTPC but work could not begin.

The entire opposition showing solidarity with the villagers had visited the Barkagaon in July this year.

The NTPC had lodged an FIR against former Chief Minister and Jharkhand Vikas Morcha-Prajantantrik (JVM-P) president Babulal Marandi, former central minister and Congress leader Subodh Kant Sahay and others for entering into the mining area without permission.

Earlier in August, the opposition leaders had surrendered in the Hazaribagh court but the police refused to arrest them.

Promoted
Listen to the latest songs, only on JioSaavn.com
The opposition parties have condemned the firing.