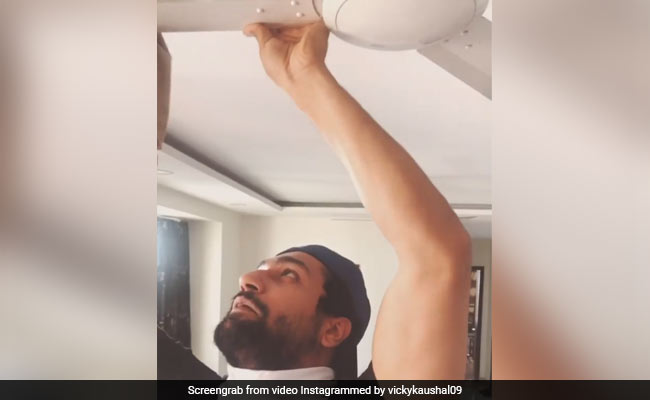 Vicky Kaushal in a still from the video. Image courtesy: vickykaushal09)

Bollywood stars, just like everyone else are busy with chores and Vicky Kaushal is not an exception. The 31-year-old actor, on Friday evening, shared a video on his Instagram profile, in which he can be seen cleaning a ceiling fan. Vicky sort of took a leaf from Amitabh Bacchan's popular song Mere Angne Mein from the 1981 film Laawaris and he sang in the video, "Jiska ladka lamba usk bhi bana naam hai. Pankha saaf karwalo, stool ka kya kaam hai." Vicky's caption was an example of wordplay at its best. He wrote: "Thought I'd interact with my fans today...Quarantine life." Meanwhile, Arjun Kapoor who has quite a bit of a reputation for trolling his friends on social media, commented: "Bahut personal ho tum with fans."

Thought I'd interact with my fans today... #quarantinelife

On the professional front, Vicky Kaushal was last seen in the horror film Bhoot Part One: The Haunted Ship. Last year, he starred in Aditya Dhar's Uri: The Surgical Strike, for which he won the National Film Award for Best Actor. The actor has Karan Johar's period drama Takht, Sardar Udham Singh and Field Marshal Sam Manekshaw's biopic, in the pipeline. The actor has also signed another film with Uri director Aditya Dhar, in which he will reportedly be seen playing the role of the Mahabharata character Ashwatthama.

Vicky Kaushal stepped into Bollywood with the 2015 film Masaan, for which he received many accolades. Vicky has also featured in hit films such as Raazi, Lust Stories, Sanju and Manmarziyaan.