"I'm looking forward to working with him," said Vicky Kaushal 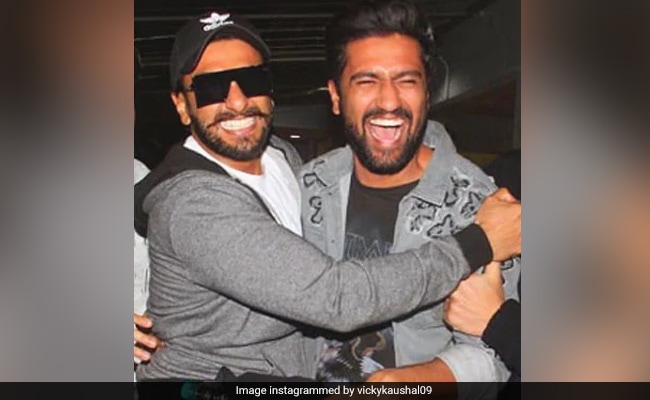 Vicky Kaushal, in an interview to Bollywood Hungama, revealed that he "loves" Ranveer Singh and that's why it is going to be "difficult" for him to play "warring brothers" with him in Karan Johar's work-in-progress film Takht. Takht is KJo's first attempt to make a period drama and it will showcase the relationship between Mughal emperor Aurangzeb (to be reportedly played by Vicky) and his brother Dara Shikoh (to be reportedly played by Ranveer Singh). Talking about working with the Gunday actor in Takht, Vicky Kaushal told Bollywood Hungama: "I love him. I absolutely love him. There were times when we were sitting on each other's laps only. It's going to be a bit difficult to play warring brothers but I'm looking forward to working with him."

Ranveer Singh and Vicky Kaushal share a great bond in real life too. We got a glimpse of their chemistry at the 65th Filmfare Awards that was held in Guwahati. The duo's power-packed dance performance to Malhari from Ranveer's film Bajirao Mastani left the audience in awe. Ranveer won the Best Actor award at the event for his performance in Gully Boy, which also won the Best Film trophy.

Takht will go on floors by the end of this month and will open in theatres on December 24 next year. It is Karan Johar's first film as a director after his 2016 film Ae Dil Hai Mushkil.