Takht: Karan Johar Shares The Dream Cast Of The Film In This Prep Video Karan Johar shared an update about his film Takht on Instagram on Tuesday. He posted two video on his Instagram story, one featuring the cast of the film including Alia Bhatt and Ranveer Singh and second one showing the preparation that is going on in the office of Dharma Productions. The first video shows a glass wall with 'Space to create' written on it and stops at the poster of Takht placed at the corner of a room in Karan Johar's office. The second video shows a wall, on which monochrome photos of Anil Kapoor, Kareena Kapoor, Ranver Singh, Bhumi Pednekar, Janhvi Kapoor, Vicky Kaushal and Alia Bhatt can be seen. Photos from magnificent sets of Takht can also be seen in the clip. 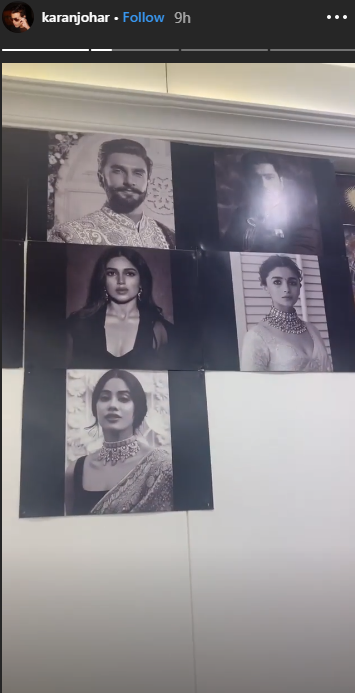 Karan Johar is known for making larger-than-life films and he says that he won't apologize to anyone for the type of films he make. Recently, the filmmaker explained his choice of subjects and said: "I made that kind of films because I was raised in a certain atmosphere and there was also an aspiration that was attached to my way of thinking. I always thought that cinema was meant to be larger-than-life and therefore, I created characters that were aspirational," Karan Johar was quoted as saying by news agency PTI.

Speaking about criticism his "larger-than-life" films receive, Karan said: "I am accused of affluenza but, having said that, I won't apologize for the films that I have made, although I think I have to tweak the level of affluenza in future," reported PTI.

Takht will be Karan's first film as a director after his 2016 film Ae Dil Hai Mushkil. (With inputs from PTI)