"You Will Always Be A Star, My Dearest Sushant Singh Rajput": Bhumi Pednekar Mourns Her Sonchiriya Co-Star

"Am going to spot you twinkling bright up there with the rest," wrote Bhumi Pednekar 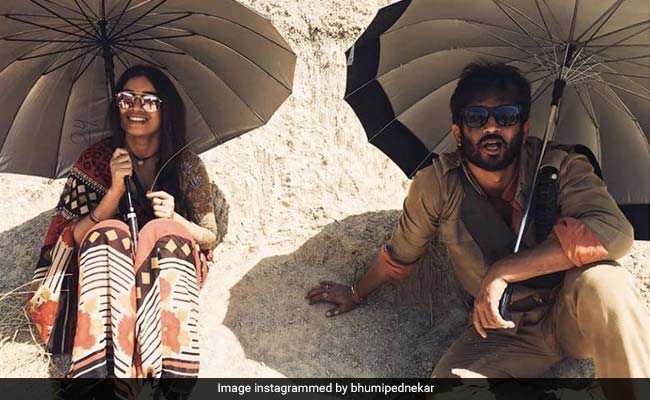 Actress Bhumi Pednekar, who starred with Sushant Singh Rajput in Abhishek Chaubey's 2019 film Sonchiriya, paid tribute to the actor in her Instagram post on Monday, a day after Sushant was found dead at his Mumbai residence. Sharing a picture of herself and Mr Rajput chilling on the sets of Sonchiriya, Bhumi remembered her "endless chats" with the actor and expressed her grief and shock with these words: "Rest in peace, my friend...Shocked and heartbroken...Still can't believe it...To star gazing and our endless chats...Am going to spot you twinkling bright up there with the rest because you are and will always be a star, my dearest Sushant Singh Rajput."

Rest in Peace my friend... Shocked and Heartbroken...Still can't believe it...To star gazing and our endless chats...am going to spot you twinkling bright up there with the rest cause you are and will always be a star my dearest SSR

Sonchiriya is unarguably one of the best films of Sushant Singh Rajput. He co-starred with Ranvir Shorey, Manoj Bajpayee and Ashutosh Rana in the film set in the harsh, dusty ravines of Chambal in the 1970s. Sushant and others, in Sonchiriya, played the roles of dacoits, who fight among themselves while taking on the cops also. The film was critically acclaimed for its storyline and for the performances of the cast.

Sushant died by suicide on Sunday morning, Mumbai Police told news agency PTI, adding that no note was found. The actor's funeral was held in Mumbai on Monday afternoon and was attended by his family, as well as his friends and colleagues, including Shraddha Kapoor, Kriti Sanon, Rajkummar Rao, directors Abhishek Kapoor and Mukesh Chhabra. Sushant Singh Rajput's close friend, actress Rhea Chakraborty, was also pictured at Mumbai's Cooper Hospital, where the actor was taken for a post-mortem, earlier in the day. According to news agency ANI, the actress will be interviewed by the Mumbai police as part of their investigation.

Sushant Singh Rajput, who played lead roles in film such as Shuddh Desi Romance, Detective Byomkesh Bakshy!, MS Dhoni: The Untold Story, Kedarnath and Chhichhore, was also a popular name in the television industry. In fact, he started his career with TV shows and became a household name after playing the role of Manav Deshmukh in Balaji TV soap Pavitra Rishta, his second project in the entertainment industry. The show aired on Zee TV for five years. The actor's last film remains Netflix's Drive.