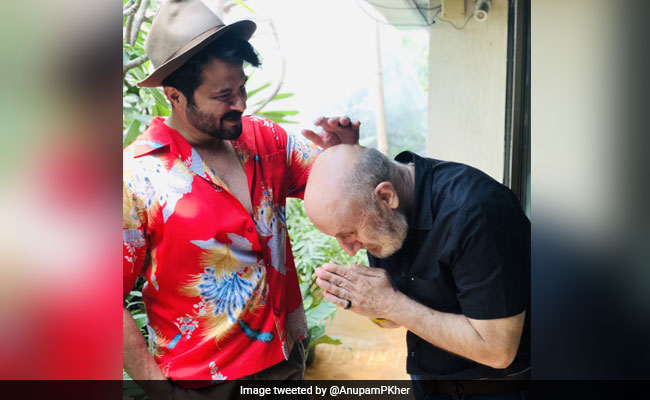 Anil Kapoor and Anupam Kher's latest Twitter exchange demands everyone's attention. Why, you ask? Well, to begin with, the Bollywood veterans added ROFL captions to their posts. Secondly, it has some really cool pictures. On Tuesday, Anupam Kher shared a set of pictures with Anil Kapoor and he wrote: "Thank you my friend Anil Kapoor for blessing me before I left for Bhopal for the shoot of The Last Show. Will follow your tips." The actor, jokingly added, "Hope you don't share same acting tips with our other friend Satish Kaushik. You need to be biased in this case. Please. You are the bestest."

Responding to Anupam Kher's humour-infused tweet, Anil Kapoor wrote: "I have a lot of tips to share. All the best my friend! I'm sure you'll make us proud as always."

I have a lot of tips to share ! All the best my friend! I'm sure you'll make us proud as always! @AnupamPKherhttps://t.co/bntApdYgVJ

Anupam Kher was last seen in the 2019 crime-thriller One Day: Justice Delivered, in which he co-starred with Esha Gupta, Kumud Mishra and Anusmriti Sarkar. The actor will next be seen in Rohit Shetty's Sooryavanshi, starring Akshay Kumar and Katrina Kaif.

Anil Kapoor was last seen in Malang, co-starring Disha Patani and Aditya Roy Kapur. The actor will next be seen in Karan Johar's Takht, starring Kareena Kapoor, Vicky Kaushal, Ranveer Singh and others.