"How I still feel on the inside in front of the camera," wrote Rhea Kapoor 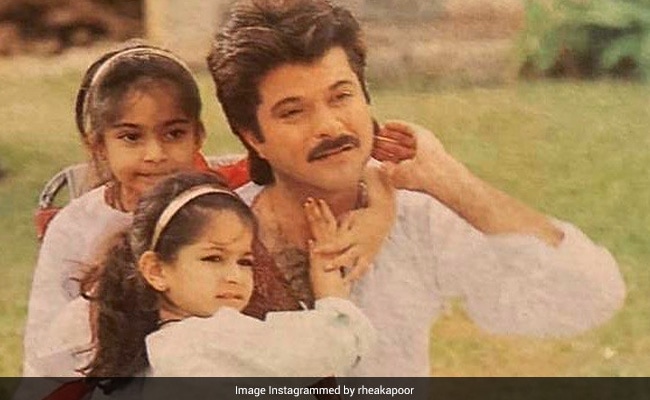 Rhea Kapoor, on Thursday, made a trip down the memory lane and dug out an old photo of herself, her sister Sonam Kapoor and father Anil Kapoor. She accompanied the blast from the past with a note, in which she wrote: "How I still feel on the inside in front of the camera. Nervous, fidgety, cranky that I'm not in control and annoyed that everyone else seems so comfy. Now I breathe and think of Oprah. #fakeittillyoumakeit." The picture features pint-sized Sonam and Rhea Kapoor posing with their dad Anil Kapoor. The trio can be seen twinning in white outfits. Check it out:

How I still feel on the inside in front of the camera. Nervous, fidgety, cranky that I'm not I'm control and annoyed that everyone else seems soooo comfy. Now I breathe and think of Oprah. #fakeittillyoumakeit

Rhea and Sonam Kapoor often share memorable pictures from their childhood on social media. Earlier this month, Sonam Kapoor posted an album comprising a throwback picture and a recent photo of herself. In both the photos, she can be seen sporting powder blue outfits. "I obviously love powder blue," she wrote.

One of Sonam Kapoor's childhood photo features her dancing and jumping with Rhea. Take a look:

Sonam Kapoor's last films were The Zoya Factor and Ek Ladki Ko Dekha Toh Aisa Laga, in which she co-starred with her father Anil Kapoor, Rajkummar Rao and Juhi Chawla. She has worked in films like Saawariya, Delhi-6, I Hate Luv Storys, Aisha, Mausam, Raanjhanaa, Bhaag Milkha Bhaag, Khoobsurat, Dolly Ki Doli, Prem Ratan Dhan Payo and Neerja. The actress has, as of now, not announced her next project.

Rhea Kapoor, on the other hand, has co-produced films such as Aisha, Khoobsurat and Veere Di Wedding, all three starring her sister. She is also the stylist behind Sonam Kapoor's awesome looks.