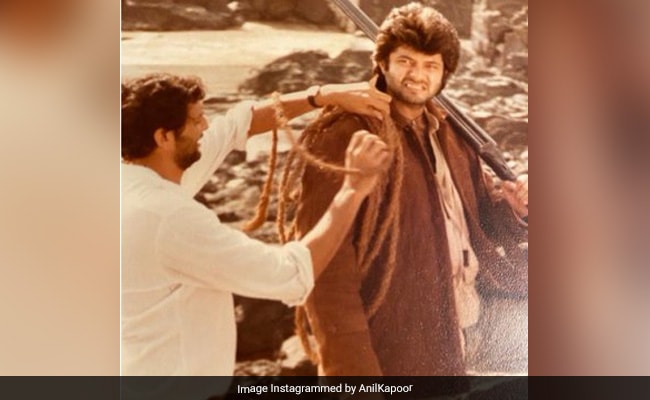 After Sonam Kapoor, her father Anil Kapoor took his turn to share a couple of throwback pictures. Making a collage out of his golden memories, the 63-year-old shared it on his social media accounts. He dug out these pictures from his archives and said that it was his "first ever photoshoot" with veteran filmmaker Shekhar Kapur from his 1989 film Joshilaay. The film was partly directed by Shekhar Kapur and then taken over by Sibte Hasan Rizvi. Anil Kapoor co-starred Sunny Deol, Sridevi and Meenakshi Sheshadri in the film. In his post on Twitter, he also said that he was "trying to channel his inner" Hollywood actor Clint Eastwood but "failed." Anil Kapoor wrote, "The new kid on the block trying to channel his inner Clint Eastwood and failing! Throwback to my first ever photoshoot with Shekhar Kapur for Joshilaay." Here's the post we're talking about:

The new kid on the block trying to channel his inner Clint Eastwood and failing! Throwback to my first ever photoshoot with @shekharkapur for #Joshilaypic.twitter.com/HuO2y2rbJo

In a retweet, Shekhar Kapur replied, "I remember that...you were so intense!" Take a look:

Quarantined at home in New Delhi, Sonam Kapoor posted a million-dollar picture from her childhood days featuring her father Anil Kapoor and sister Rhea on Monday. Sharing the picture on Instagram, she captioned it, "Miss you Anil Kapoor and Rhea Kapoor."