Quarantined, Sonam Kapoor Was Missing Fam. So She Posted This Throwback

"Miss you and Anand too," Anil Kapoor wrote in the comments section 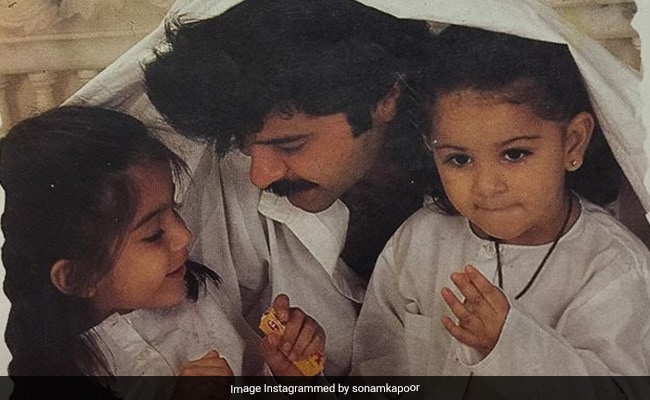 Sonam Kapoor, who is currently in New Delhi along with her husband Anand Ahuja, was missing her father Anil Kapoor and her sister Rhea Kapoor big time, so she shared a throwback picture from her good old childhood days on her Instagram profile on Monday. In the throwback picture, Sonam, Rhea and Anil Kapoor can be seen dressed in colour-coordinated white outfits. "Miss you Anil Kapoor and Rhea Kapoor," she captioned the post. Anil Kapoor, in the comment section wrote: "Miss you and Anand too." Sonam Kapoor and Anand Ahuja returned from London last week and have been in quarantine ever since.

Sonam Kapoor has actively been sharing posts on the novel coronavirus, which originated in Wuhan (China) late last year and has been declared a pandemic by the World Health Organisation. Here are some of the posts shared by Sonam:

Kindness, Empathy and understanding is the need of the hour. Self discipline, self reflection and isolation is the need of the hour. There isn't any place for negativity, hate, xenophobia, racism and dishonesty. Please please stay at home if you can. Drink hot water as much as you can. Gargle with Salt . Bathe as soon as you come home and don't sit anywhere before you do. Wash clothes immediately or sun them Clean all metal surfaces Don't smoke Hands should be washed several times a day. Elevate zinc and vit c doses. Pets don't spread the virus, so stop abandoning them or killing them. Don't eat cold things. Attack a sore throat immediately. Apparently the virus lives in the throat for 3-4 days before moving to the lungs.

On the work front, Anil Kapoor was last seen Mohit Suri's Malang. He will next be seen in Mumbai Saga.