"Want My Daughter-In-Law To Rule The House": Neetu Kapoor On Alia Bhatt 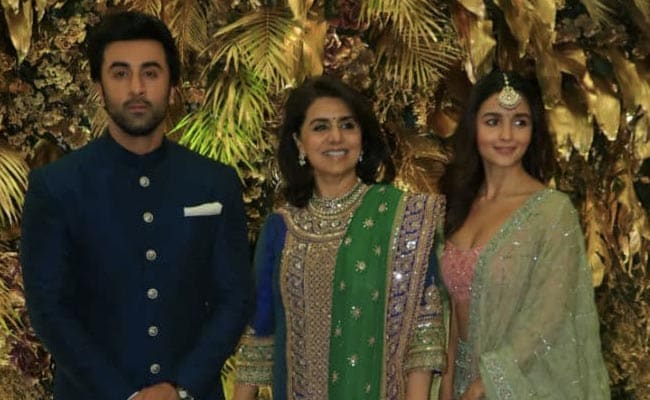 A throwback of Neetu Kapoor with Alia and Ranbir.

Neeu Kapoor, who has been brightening up our Instagram feeds with super cute posts from her son Ranbir Kapoor's wedding, shared another video on her profile. The video happens to be from the sets of the TV reality show Dance Deewane Juniors, where she features as one of the judges. In the video, the veteran actress can be seen talking about her daughter-in-law Alia Bhatt. Neetu Kapoor, in the video, talks about sass, after which host Karan Kundrra makes a pun on the word sass. He jokingly talks about Alia and Ranbir's wedding and says in the video: "Sass toh aa rahi hai because bahu bhi toh aa rahi hai". (She is learning sass as her daughter-in-law is coming).To which Neetu replied, "Aa gayi hai" (She has come). When Karan Kundrra asked her, "Ghar pe chal kiski rahi hai? Sass ki ya bahu ki (who rules the house? Mother-in-law or daughter-in-law)?" Neetu Kapoor said, "Khaali bahu ki. Mai chahti hu ki sirf bahu ki hi chale (Only daughter-in-law. I want that only my daughter-in-law should rule the house)."

After the star couple's wedding last week Neetu Kapoor welcomed Alia to the family with a super cute post. She shared pictures from the wedding album of the star couple and she wrote: "My world," adding evil eye and heart emojis.

Neetu Kapoor has actively been sharing pictures from Alia and Ranbir's wedding. See some of the posts here:

Some photos from the mehendi:

Neetu Kapoor  was married to actor Rishi Kapoor, who died in Mumbai in April 2020 after battling cancer for two years. He was 67. Their daughter Riddhima Kapoor Sahni is a Delhi-based jewelry designer. Neetu and Rishi Kapoor's son Ranbir is also a successful Bollywood actor. Neetu Kapoor's next project Jug Jugg Jeeyo, co-starring Anil Kapoor, Kiara Advani, Varun Dhawan and content creator-actor Prajakta Koli. The film has been backed by Karan Johar's Dharma Productions and it has been directed by Raj Mehta. She is currently seen judging the TV reality show Dance Deewane Juniors.