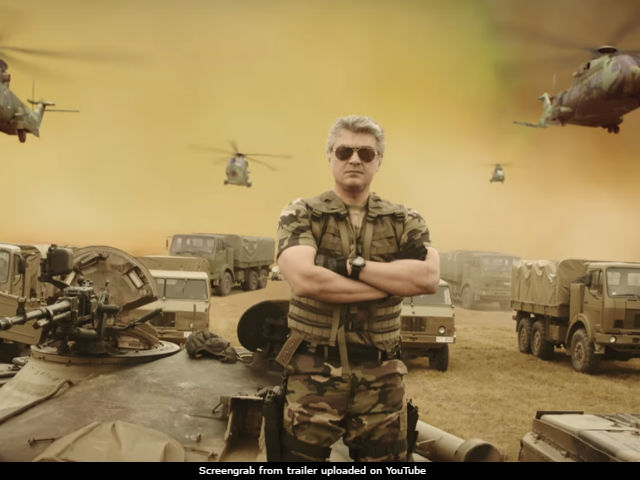 Vivegam Trailer: Ajith in a still from the trailer (courtesy YouTube)

New Delhi: The full-fledged trailer of Ajith's much-awaited Vivegam is here guys! The Tamil superstar features as a special agent named AK of the Counter Terror Squad in what can be considered as one of the most anticipated movies in the South. The role of Ajith's anti-hero is played by none other than Vivek Oberoi, who also occupies considerable amount of screen space in the trailer. In the trailer, also present are actresses Akshara Haasan (who features as AK's daughter) and Kajal Aggarwal, who plays the role of AK's wife. This is the first time when both the actresses get to appear on promotional material of the film.

The power-packed trailer is actually a collage of high-octane action scenes mostly featuring the superstar (of course, why not?) while the antagonist avoids the limelight in his attempt to devise schemes to destroy AK's reputation. Vivek Oberoi's character is that of the "most-wanted criminal" who draws AK's attention following a series of bomb blasts in the heart of Serbia, where most of the film was shot. "After much contemplation, the makers have finalized Vivek as the antagonist," a source close to the film's unit was quoted by news agency IANS as saying.

Much like the teaser of Ajith's Vivegam, the trailer also features sequences which are reminiscent of Hollywood hits like the Mission Impossible and James Bond movies. The two-and-half minute trailer wraps with a deadly warning from AK: "You will see my rage." Vivek Oberoi, beware.

Promoted
Listen to the latest songs, only on JioSaavn.com
Watch the trailer of Ajith's Vivegam here:


Directed by Siva, Vivegamwill arrive in theatres on August 24. Vivegam marks Ajith's third collaboration with the director after 2014's Veeram and 2015's Vedhalam.