The Internet found everything intriguing about her birthday - how Priyanka added a dash of sindoor to her birthday look. 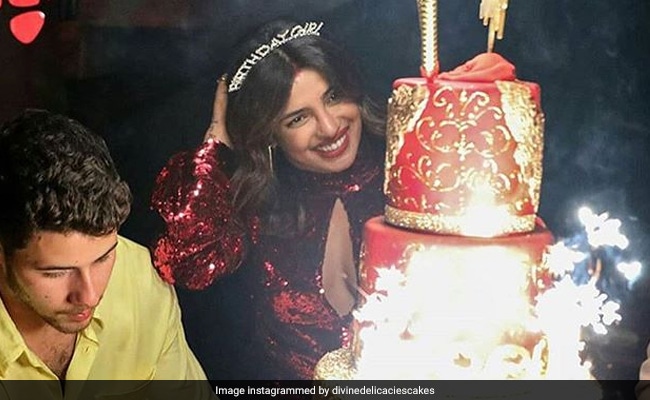 Priyanka Chopra on her birthday night in Miami (courtesy divinedelicaciescakes)

Actress Priyanka Chopra's 37th birthday celebrations in Miami made the actress top the trends list for days. The Internet found everything intriguing about her birthday - from the towering birthday cake to the after-party on a yacht and now, how Priyanka added a dash of sindoor to her birthday look. On her big day, The Sky Is Pink actress was a scarlet diva in a sequinned ensemble from the studios of 16arlington. Priyanka's full-sleeved short dress came with an extended wrap and a bold cut-out neckline. Priyanka went a little OTT with a lipstick-shaped clutch designed by Judith Leiber. In pictures shared by Miami-based patisserie Divine Delicacies Cakes, there are clearer glimpses of Priyanka's sindoor as she blows out candles on a show-stealing cake.

In Miami with the birthday gurllll! Happy bday Mimi didi. There's never gonna be another like you. Actress or sister @priyankachopra

Priyanka Chopra's birthday celebrations continued with a yacht party, when the actress was spotted smoking with Nick Jonas and her mother Madhu Chopra in tow. Angry netizens reminded Priyanka that she is asthmatic and that she had once campaigned for cracker-free Diwali to advocate for an anti-pollution environment.

On Tuesday evening, Priyanka Chopra thanked her friends and followers for sending a whole lot of love on her way on her birthday, adding that she was taking a break. In an Instagram story, she wrote: "Sorry, I haven't responded earlier, was taking a bit of a break from technology... but now, I'm back and I just want to say thank you all so much. I hope everyone feels as loved as I do."

Priyanka Chopra's upcoming Bollywood movie The Sky Is Pink will have a world premiere at The Toronto Film Festival on September 13, which the actress will attend with her team. The Sky Is Pink hits screens in India on October 11.