Venkatesh Daggubati's Narappa Postponed: "We Will Bring It To You When The Time Is Right," Tweets Actor

Narappa was scheduled to be released on May 14 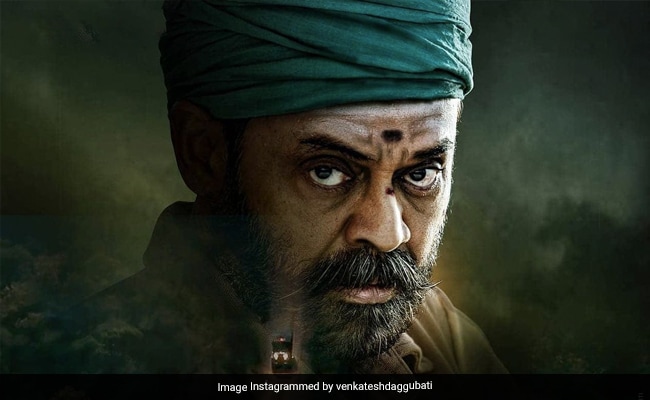 The makers of Venkatesh Daggubati's upcoming Telugu film Narappa have postponed its release date, the actor announced on Twitter on Thursday. Venkatesh, who will play the lead role in Srikanth Addala's directorial venture, shared an official statement about the film on the micro-blogging platform. In his tweet, the actor wrote that Narappa will not be released on May 14 due to the rise in Covid-19 cases amid the second wave of pandemic. "In lieu of the pandemic, Narappa will not be releasing on May 14th. A new theatrical date will be announced once we overcome this unprecedented crisis. Stay safe," he tweeted.

The statement read, "Narappa is a film that we have made with a lot of dedication and hard work and your love towards the film has been overwhelming. However, we are all going through a turbulent time during this unprecedented global pandemic and hence, keeping in mind the health and safety of our beloved audience, the theatrical release of the film has been postponed."

"We will bring Narappa to you just when the time is right... Until then, be safe, take care of yourself and stay strong. We will all get through this together," read an excerpt from the statement.

In lieu of the pandemic, #Narappa will not be releasing on May 14th . A new theatrical date will be announced once we overcome this unprecedented crisis.
Stay safe! #NarappaPostponed#Priyamani@KarthikRathnam3#SrikanthAddala#ManiSharma@SureshProdns@theVcreationspic.twitter.com/7QWIL8lOG6

In January this year, Venkatesh Daggubati had announced that Narappa will hit the screens on May 14 this year. On January 29, he shared the poster of the upcoming movie on his Instagram handle and wrote, "Witness #Narappa in theatres from May 14th, 2021 ! #NarappaOnMay14."

In March, Venkatesh had shared another poster of the film on the platform on the occasion of Maha Shivratri. The actor posted a glimpse of the younger version of his character Narappa. He wrote, "Meet the young Narappa! Happy Maha Shivaratri."

We are talking about this poster.

Narappa is a Telugu remake of the 2019 Tamil film Asuran which featured Dhanush in the lead role. Asuran was based on the novel named Vekkai by writer Poomani. Asuran won the Best Tamil Film award at the 67th National Awards this year.

Narappa will follow a story of a lower-caste family who is oppressed by rich landlords belonging to the upper caste. In the film, Venkatesh Daggubati is paired opposite actress Priyamani. Venkatesh will play the role of Narappa and Priyamani is cast as Narappa's wife Sundaramma. The film will also feature Karthik Rathnam, Prakash Raj, Murali Sharma and Sampath Raj in key roles.

Meanwhile, the release date of another upcoming Telugu film Acharyahas also been postponed amid the pandemic. The movie was scheduled to be released on May 13. The makers of Acharya are yet to announce the new release date. The movie will feature Chiranjeevi, Ram Charan, Kajal Aggarwal and Pooja Hegde.

"Keeping in view of the pandemic situation, #Acharya movie will not be releasing on May 13. New Release date will be announced once the situation becomes normal. Wear mask, Stay home and stay safe! #AcharyaPostponed," the official Twitter handle of Konidela Production Company tweeted.

Keeping in view of the pandemic situation, #Acharya movie will not be releasing on May 13.

New Release date will be announced once the situation becomes normal.

Coming back to Venkatesh Daggubati, the actor also has Drushyam 2 and F 3: Fun And Frustration coming up in 2021. He was last seen in film Venky Mama in 2019.