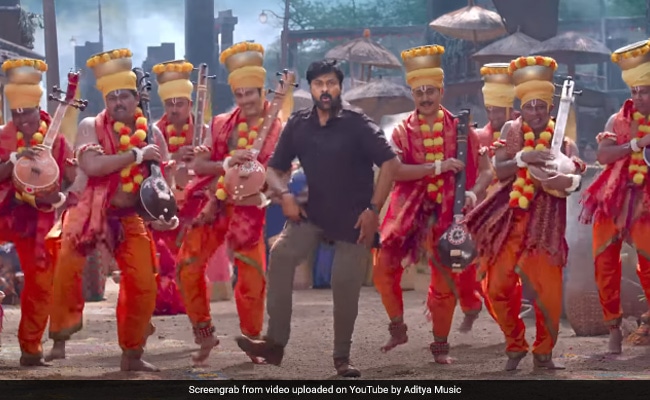 Chiranjeevi in a still from the song Laahe Laahe (courtesy YouTube)

Need a lesson on super cool dance moves? Telugu megastar Chiranjeevi to the rescue. The 65-year-old actor features in a teaser of the song Laahe Laahe from his upcoming movie Acharya. The Laahe Laahe teaser offers just a glimpse of Chiranjeevi's sprightly persona when he is on the dance floor. Chiranjeevi, who plays the role of a social radical in Acharya, can be seen dancing his heart out in the teaser. In the teaser, Chiranjeevi can be seen matching steps with a bunch of Haridasulu, a group of traditional religious singers. However, it's Chiranjeevi's unmatchable swag that makes him the highlight of Laahe Laahe. Acharya is socio-political entertainer, in which Chiranjeevi's character will be a strong voice in supporting the conservation of natural resources.

Watch the teaser of Laahe Laahe here. The film's music has been composed by Mani Sharma.

Needless to say that the Laahe Laahe teaser was flooded with comments cheering for Chiranjeevi's dance moves. "Amazing," wrote a user while fans revealed that they've been watching Chiranjeevi's song on repeat.

Directed by Koratala Siva, Acharya also stars Chiranjeevi's son Ram Charan, who is co-producing the movie along with Niranjan Reddy under the labels Konidela Production Company and Matinee Entertainment. The ensemble cast of the movie also includes actors such as Kajal Aggarwal​​, Pooja Hegde, Sonu Sood and Jisshu Sengupta, who feature in pivotal roles. Actress Regina Cassandra will feature in a special song in the movie.

Acharya has also been written by Koratala Siva, who directs the movie. Acharya is schedule to hit screens on May 13, 2021.