To Eat Or Not To Eat: How Twinkle Khanna Resolved This Dilemma. See Her Post

"Or am I just trying to feel better about gobbling up some scones today," wrote Twinkle Khanna 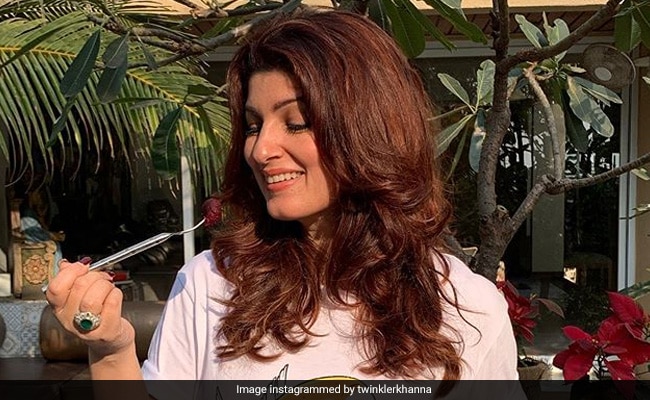 Twinkle Khanna or should we say Baba Twinkdev's idea for her latest Instagram post arrived freshly baked from an oven with 0 % guilt. In simple words, Mrs Funnybones' fair share of gyaan in her latest Instagram entry has something to do with food and it is inspiring in every sense. Twinkle Khanna might not be a fan of cooking but is a self-confessed foodie. Adding her staple hashtag #BabaTwinkDev to her post, Twinkle Khanna wrote: "Have that slice of cake. Chug down the wine. One day you'll turn into a bag of bones anyway. Why do it when you are still alive?" In her caption, Twinkle Khanna sort of revealed the thought behind the idea and she wrote: "Err...Or am I just trying to feel better about gobbling up some scones today." She added the hashtags #toeatornottoeatthatisthequestion and #BabaTwinkDev to her post.

Twinkle Khanna's post was a hit with her Instafam. Actress Tisca Chopra commented: "Hope there was clotted cream." An Instagram user wrote: "Amen to that." This fan shared similar thoughts as Twinkle and added, "Yeah life is too short, enjoy it now or never." Another comment on the post read: "That's me every eat day." Check out the post here:

Err.. Or am I just trying to feel better about gobbling up some scones today:) #toeatornottoeatthatisthequestion #BabaTwinkDev

For those who need a background of Twinkle Khanna's love for food. Take a look at some of the posts shared by the author :

I may not always be around to watch what my kids are up to, so here are some healthy treats that I would put inside their dabbas to keep an eye on them instead. I am nominating @shefalishahofficial @lapetitchef and @namratashirodkar to let us have a peek at what they put on their little one's plate. I would love to know what healthy treats you like making for your children as well Share a photo on social media with #WhatsInYourKidsDabba and tag @tweakindia Recipe Corner Ragi and Rava Idli recipe Dry roast the rava and once cool, add the ragi flour in equal proportions. Add salt, curd and water. Leave it alone for half an hour. Put in a small pinch of baking soda before steaming. Once ready, go crazy decorating your idlis with carrot eyes, cherry tomato noses and whatever bits you have leftover.