Akshay Kumar shared a video on Instagram on Wednesday as he joined a group of volleyball players, who were playing the game, at a beach in Mumbai 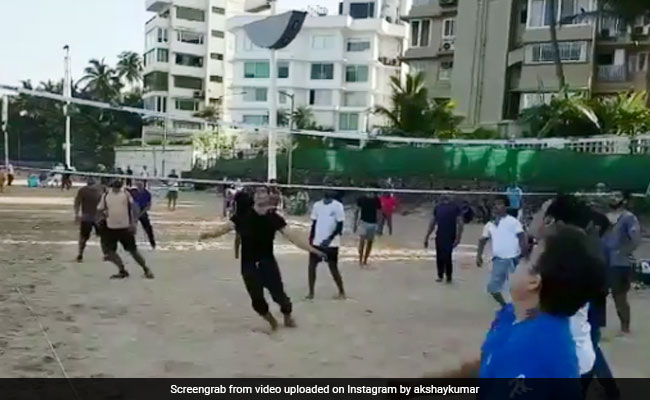 Akshay Kumar, who has been busy working on his upcoming projects, took some time off to play volleyball. The Kesari actor posted a video on Instagram on Wednesday. Akshay Kumar joined a group of volleyball players, who were enthusiastically playing the game, at a beach in Mumbai. In the morning, looks like the 52-year-old actor "mixed up" working out at the gym and his time out at the beach. It indeed seems "fun" and that Akshay enjoyed his time without interruption from fans and paparazzi. On his Instagram post, Akshay wrote: "Joined these boys for a game of volleyball this morning at the beach. You don't always need a gym to exercise, mix it up. It's fun."

Take a look at Akshay playing volleyball at the beach:

Joined these boys for a game of volleyball this morning at the beach. You don't always need a gym to exercise, mix it up...it's fun.

Superb Sunday morning playing volleyball with these boys at Juhu beach today. Always been a believer of 'a little goes a long way' So what are you doing to stay fit this weekend? Do share your photos/videos/experiences using #FitIndia

On the work front, he will also be seen in Rohit Shetty's newest addition to his cop dramas Sooryanvanshi, which will hit the theatres on March 27. Akshay Kumar will then be featuring in his next film Laxmmi Bomb, which will be out on June 5. Third and fourth films in his line-up would be Bachchan Pandey followed by Bell Bottom.