This Pic Of Sridevi With Boney Kapoor, Shared By Janhvi, Is Making Us Emotional Again 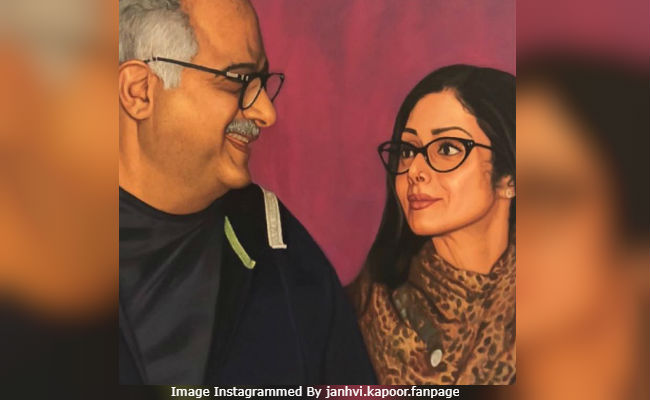 This is what Janhvi shared (Image courtesy: janhvi.kapoor.fanpage)

New Delhi: Janhvi Kapoor posted a beautiful painting of her parents Sridevi and Boney Kapoor on her Instagram story and the picture is making us emotional all over again. Sridevi died at the age of 54 in Dubai after drowning in her hotel bathtub in February. The picture shared by Janhvi has been chronicled by several of her fan clubs on Instagram and comments like "wow" and "awesome" have been posted. Janhvi is currently awaiting the release of her debut film Dhadak. She also has a younger sister Khushi. Sridevi recently won a National Award for Best Actress (posthumously) for her role in MOM. Her husband Boney Kapoor and daughters Janhvi and Khushi accepted her award.

Take a look at Sridevi and Boney Kapoor's painting here.

InstaStory | Janhvi Kapoor shares a pic of her mother and father Sridevi and Boney. @janhvikapoor

Just last week, a special tribute was given to the late actress by three of her fans. Boney Kapoor, Janhvi and Khushi had invited them for a meeting. Paridhi Bhati, Bhavana Varma and Tonu Sojatia had decorated the car with stills from Sridevi's films. "We were thrilled. They hosted us for nearly 40 minutes, came down to see our car and admired it very much. They insisted we stay back for lunch but we had time constraints, so we enjoyed delicious coffee with them," Ms Sojatia told news agency IANS.

The trio also presented Boney Kapoor with stills of Sridevi from her film Solva Saavan (1979) and to Janhvi and Khushi, they gifted images from the film Kumarasambhavam (1969), when Sridevi was four.

Promoted
Listen to the latest songs, only on JioSaavn.com
Megastar Sridevi had started her career as a child artiste when she was just all of four. She had worked in 300 films in her entire career.