'The First Time' Anand Ahuja Saw Sonam Kapoor. It's Got A Delhi 6 Connection Sonam Kapoor in a still from Delhi 6 (courtesy IMDB)

Time to revisit Sonam Kapoor as Bittu Sharma from Delhi 6. Sonam Kapoor's second Bollywood film clocked 10 years on Wednesday and it's not just the actress who is celebrating the occasion with social media posts but also her husband Anand Ahuja. On Instagram, he shared a post simply captioned "icon", dedicated to Sonam, and also shared his thoughts about the first time he saw Sonam, in the comments section. Delhi 6 appears to be the first film of Sonam that Anand Ahuja watched and the reason he got tickets to the movie was because staying in New York for a year, he had missed home long enough and wanted to revisit Delhi on the big screen. "The first time I ever saw you... on the screen... at Cinema Village in Union Square NYC... your face looked familiar even though we had never met," read his post.

"It was my second year working and your second film. I hadn't been home in a year and went to see the movie just because I was homesick and it had the title 'Delhi' in it," he added. Read his comment here. 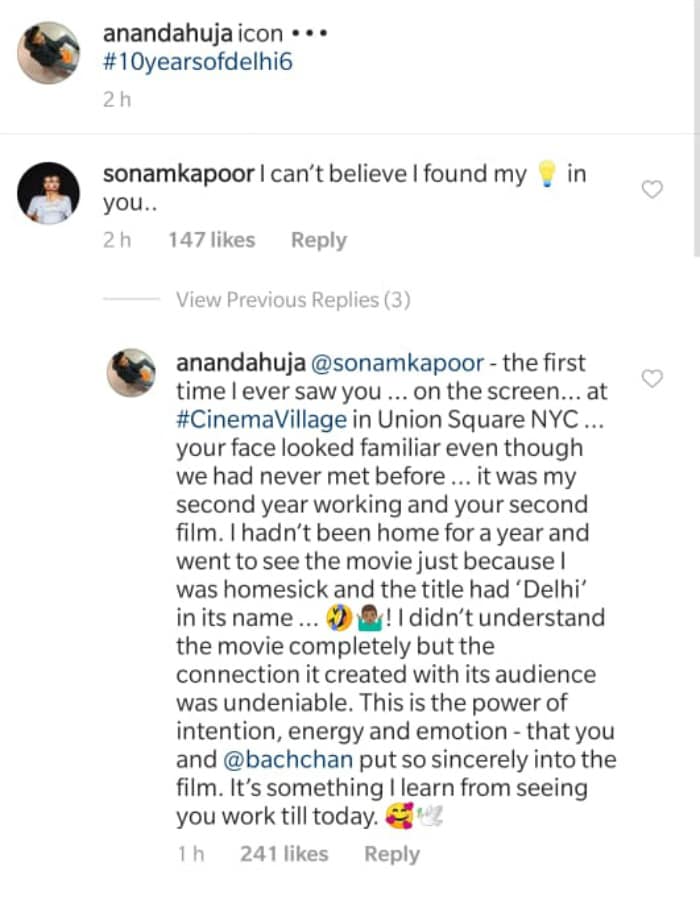 Anand Ahuja and Sonam Kapoor married in May 2018.

Sonam Kapoor also cherished old memories and put out a note for those who made Delhi 6 a memorable experience for her: "10 years ago, Rakeysh Omprakash Mehra brought Abhishek Bachchan and I together for what we knew would be a heart-warming and genuine story about love, life and relationships. Here's to celebrating those small, bright moments of soul searching." Sonam co-starred with Abhishek Bachchan in the film.

Abhishek also brushed up his Delhi 6 memories and said in a lengthy post: "10 years! Hard to believe. What a wonderful time I had shooting this film. Such a powerful and fun cast and crew. One of my favourite soundtracks, that I still listen to regularly. A film with a heart and soul of gold and also a very poignant message."

10 years! Hard to believe. What a wonderful time I had shooting this film. Such a powerful and fun cast and crew. One of my favourite soundtracks, that I still listen to regularly. A film with a heart and soul of gold and also a very poignant message. Thank you @rakeyshommehra for allowing me to be a part of this gem. To the entire cast- @sonamkapoor, Chintu uncle, Waheeda aunty, Om Ji, Divya, Atul, Aditi, Vijay, Prem uncle, Supriya Ji, Pawan Ji, Deepak, Tanvi, K K Raina Ji, Sheeba, Akhilendra, Geeta Bisht, Daya, Raghuvir Ji, Cyrus, Vinayak, Hussan and @amitabhbachchan. Binod Pradhan Ji, Nakul Kamte, Prasoon Joshi, @arrahman, Bharthi, Kamlesh Panday Ji, Arjun Bhasin, Samir da. Thank you! Time for a reunion. #10yrsOfDelhi6 Oops... I forgot to thank - #Masakali

Directed by Rakeysh Omprakash Mehra, Delhi 6 was an intriguing portrayal of the lives tucked inside the lanes of Chandni Chown in Old Delhi and ended on a cathartic note of communal harmony. The film was also brought alive by names such as Waheeda Rehman, Rishi Kapoor, Om Puri, Divya Dutta, Tanvi Azmi, Aditi Rao Hydari, Supriya Pathak and others. Delhi 6 won the Nargis Dutt Award for Best Feature Film on National Integration at 57th National Film Awards.