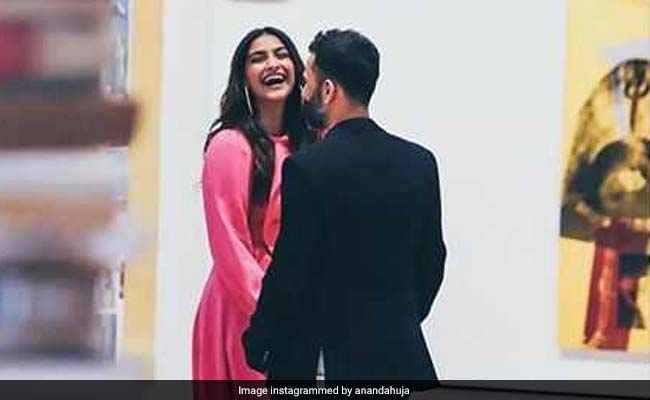 Sonam Kapoor's husband Anand Ahuja might not have shared a Valentine's Day post on Thursday but he surely made up for it by sharing a loved-up throwback picture of himself along with his wife Sonam Kapoor on his Instagram profile on Friday evening. In the oh-so-adorable picture, Sonam Kapoor can be seen smiling as Anand looks at her in awe. The Neerja actress can be seen wearing a pink flowy dress in the picture, while Anand can be seen complementing her in an all-black outfit. Anand's flashback Friday post received lots of love from fans and comments like "what a beautiful couple" and so adorable" were seen on Anand's post. Besides several fans, Maheep Kapoor and Sanjay Kapoor have also liked Anand Ahuja's post.

Without much ado, check out Anand Ahuja's post here:

Sonam, who spent her Valentine's Day without Anand Ahuja this year, shared a lovely throwback picture of herself along with Anand and wrote: "Happy Valentine's Day my love. I miss you and I'll see you soon." Sonam accompanied the post with her and Anand's signature hashtag "#EveryDayPhenomenal."

Happy Valentine's Day my love... I miss you and I'll see you soon... @anandahuja @jasonfisher #everydayphenomenal

While in Delhi last week, Sonam and Anand treated their fans to mushy pictures. Check out their posts here: