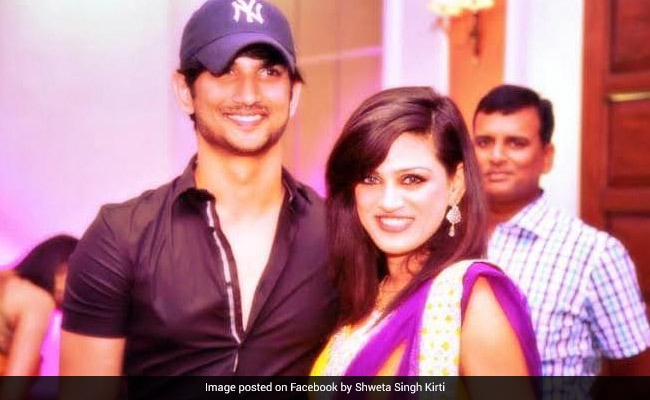 A throwback pic of Sushant with sister Shweta (courtesy sskirti)

Sushant Singh Rajput's sister Shweta Singh Kirti, who recently flew into India from the US, where she lives, poured her heart out in her send-off note for Sushant, which, however, she deleted from her unverified Facebook account within a day. Shweta had also attached a handwritten note given to her by Sushant, which too have been removed along with the post. Sushant Singh Rajput died on Sunday. He was 34. The police say Sushant died by suicide and an investigation is currently underway. Shweta, who is currently in Patna with her family, remembered Sushant and wrote in a post on her unverified Facebook: "I know you were in a lot of pain and I know you were a fighter and you were bravely fighting it. Sorry mera sona... sorry for all the pain you had to go through. If I could, I would have taken all your pain and given all my happiness to you." As part of the investigation over Sushant Singh Rajput's tragic death, the police will also probe allegations that the actor was depressed because of professional rivalry. The actor allegedly lost six of his seven films, which he had signed after his 2019 film Chhichhore.

Shweta's eulogy for Sushant continued with words, which will tug at your heartstrings: "Your twinkling eyes taught the world how to dream, your innocent smile revealed the true purity of your heart. You will always be loved, mera baby and so so much more. Wherever you are, mera baby, stay happy, stay fulfilled and know that everyone loved you, loves you and will always love you unconditionally."

Shweta had also attached a note on compassion, kindness and forgiveness in her post, writing: "All my dear ones. I know it is testing times but whenever there is choice, choose love above hatred, choose kindness and compassion above anger and resentment, choose selflessness above selfishness and forgive, forgive yourself, forgive others and forgive everyone. Everybody is fighting their own battles. Be compassionate to yourself and be compassionate to others and everyone. Let not your heart close ever, at any cost!"

Earlier, Shweta Singh Kirti had revealed how her five-year-old son consoled her after Sushant's death: "When I told Nirvanh the news that mamu is no more, he said 'But he is alive in your heart'."

On Thursday morning, Shweta said that the family will immerse Sushant Singh Rajput's ashes later today. A day after Sushant's death, the actor's father, along with other members of the family, travelled from Patna to Mumbai to perform the actor's last rites. Sushant Singh Rajput was last seen in Netflix film Drive, ahead of which he also starred in Chhichhore and Sonchiriya. The actor's upcoming film is Dil Bechara, which was postponed because of the coronavirus lockdown.