"A rom-com, it was to explore Sushant's dancing skills," said Rumi

After Sushant Singh Rajput's death, director Rumi Jafery reveals that the actor was cast with rumoured girlfriend Rhea Chakraborty in his new project - a romantic film, reported Mumbai Mirror. Mr Rajput, 34, was found dead at his Mumbai residence on Sunday. Police said the actor died by suicide and that an investigation is ongoing, reported news agency PTI. Two days after Sushant's death, Rumi Jafery, in an interview with Mumbai Mirror, confirmed that he had signed Sushant and Rhea for his new film and they were scheduled to start shooting the rom-com in May when the coronavirus outbreak led to the nationwide lockdown. Rumi Jafery has directed Rhea in his upcoming film Chehre also. The film, featuring Amitabh Bachchan and Emraan Hashmi in the lead roles, was slated to release in April this year but couldn't due to the lockdown.

Rumi Jafery told the publication that he was going to highlight Sushant Singh Rajput's dancing skills in the film as the actor "loved" Govinda's dance moves. For those who don't know, Sushant was a great dancer and he was a part of Shiamak Davar's dance group before he started his career in Bollywood. Speaking about the project and the role Sushant was going to play in it, Rumi Jafery said: "A rom-com, it was to explore Sushant's dancing skills. He was a fantastic dancer and my film would have showcased him in a different light. He loved Shah Rukh Khan's acting and Govinda's dance and that's why I had a full-fledged dance number with Govinda-style moves planned for our mahurat." He added that he will "never" make the movie as it was "written keeping Sushant in mind."

Rhea Chakraborty and Sushant Singh Rajput often featured in headlines for reports of their rumoured relationship. However, neither of them ever confirmed the news. The duo were photographed together several times in the city. They also used to trend for leaving adorable comments on each other's Instagram posts.

On Monday, Rhea was pictured outside Mumbai's Cooper Hospital where Sushant Singh Rajput was taken after he was found dead at his Bandra home. According to news agency ANI, Rhea will be questioned by the police as part of their investigation. 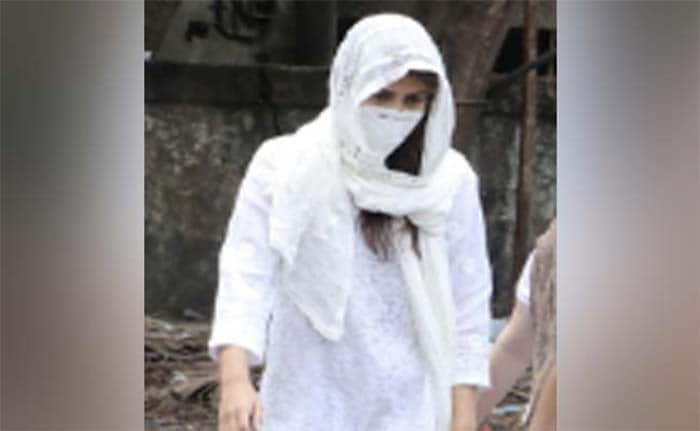 Rhea Chakraborty pictured at the hospital.

In the same interview, Rumi Jafery, who is known for writing screenplays for movies like Coolie No 1 and God Tussi Great Ho and directing 2009 film Life Partner, revealed that Sushant was "looking forward" to start working on the film. He also revealed that some of the big producers of Bollywood were keen on making a film with Sushant after his 2019 hit Chhichhore. However, the actor wasn't interested in meeting them. "The industry knew that I was working with Sushant and two big producers sought my help to get in touch with him. I spoke to Sushant but he wasn't keen on meeting them," he said and added: "His response was simple, 'Sir, picture hi nahi karni to abhi milkar kya karunga? Jab agli picture commit karni hogi tab mil looga'."

On Tuesday, politician Sanjay Nirupam, who also attended Sushant Singh Rajput's funeral on Monday, alleged that that the actor signed seven films after Chhichhore but lost all seven within six months. Maharashtra Home Minister Anil Deshmukh has announced that Mumbai police will also probe allegations that Sushant was depressed because of professional rivalry during the investigation.

Sushant Singh Rajput was last seen in Netflix's Drive. The actor's upcoming film Dil Bechara, co-starring Saif Ali Khan and debutant Sanjana Sanghi, was scheduled to release in May but got postponed due to the coronavirus lockdown. Sushant made Bollywood debut with Abhishek Kapoor's Kai Po Che! in 2013 and went on to feature in films such as Shuddh Desi Romance, Detective Byomkesh Bakshy!, MS Dhoni: The Untold Story, Chhichhore and Kedarnath.