Sooryavanshi: Akshay Kumar On Why Shooting Bike Stunts In Bangkok Was 'Extra Special'

"Many years back I would ride a bike in Bangkok to deliver food," said Akshay Kumar 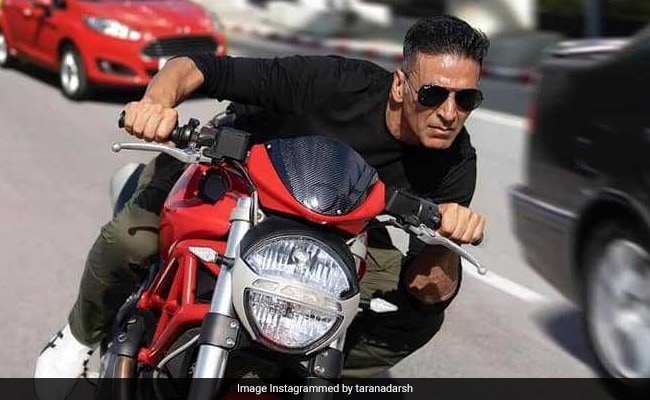 Akshay Kumar, who is currently busy with the shooting of his forthcoming film  Sooryavanshi  in Bangkok, is having a great time there. We are not saying this, these are the words of Akshay, who says that shooting for these bike stunts in the country was "extra special," reports news agency PTI. For those who don't know, Akshay Kumar has a history with Bangkok. Before Akshay stepped into the Indian film industry, the actor worked as a chef and waiter in Bangkok. Akshay recalled his experience and said, "Doing these bike stunts on the streets of Bangkok was extra special. Many years back I would ride a bike in Bangkok to deliver food. Now I am doing the same all over again, to earn my food," PTI quoted Akshay as saying.

Meanwhile, Bollywood trade analyst Taran Adarsh shared a picture from the film's Bangkok schedule on Instagram on Tuesday. Dressed in a black t-shirt and olive green trousers, Akshay can be seen riding a bike in the picture. "Action, stunts, chase... Akshay Kumar shoots bike stunts on the streets of Bangkok for Sooryavanshi. Akshay collaborates with director Rohit Shetty for the first time," wrote Taran Adarsh.

Sooryavanshi is a high-octane action film directed by Rohit Shetty. Sooryavanshi is the fourth movie in Rohit Shetty's cop universe. The first three films were Singham, Singham Returns and Simmba. The film also stars Katrina Kaif and it will be produced under Karan Johar's Dharma Productions.

Sooryavanshi is slated to release on August 15 this year and it will clash with two big films at the box office, which include Prabhas and Shraddha Kapoor's Saaho and John Abraham's Batla House.