Sooryavanshi is a cop drama directed by Rohit Shetty 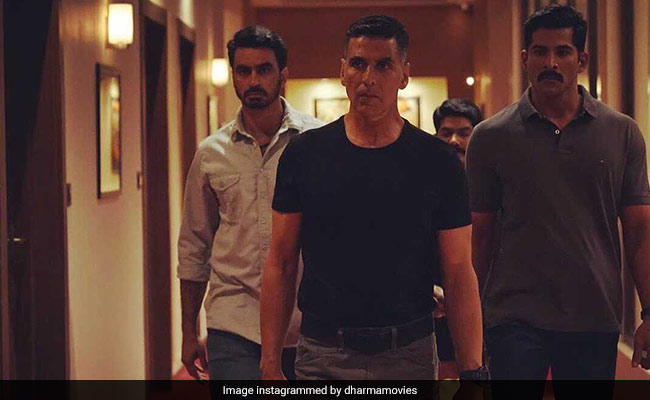 Akshay Kumar on the sets of Sooryavanshi. (Image courtesy: dharmamovies)

The makers of Sooryavanshi quenched the curiosity of fans to some extend by sharing a picture of film's lead actor from the sets on social media on Tuesday. The picture was shared on the official Instagram account of Dharma Productions, which has backed the project. In the picture, Akshay Kumar could be seen dressed in a black t-shirt and a pair of brown trousers and the expression on his face was intense. "Justice, their motto. Peace, their service. Reporting on duty! Sooryavanshi," read the caption on Akshay's picture shared by Dharma Productions. Just like us, Akshay's fans were also excited to see the picture. "Excited to see this film," read a comment from a fan.

On Monday, Akshay shared a picture of himself along with Sooryavanshi director Rohit Shetty, film's producer Karan Johar , and Ajay Devgn and Ranveer Singh, who were also a part of Rohit Shetty's cop universe. Ranveer played the role of a police officer in the 2018 film Simmba while Ajay Devgn starred in the cop series Singham. Akshay, who will also star as a police officer in Sooryavanshi shared the picture on his Instagram profile and captioned the post: "The cop universe just got bigger as Sooryavanshi takes charge!"

Last month, Katrina Kaif, who plays the female lead in Sooryavanshi, announced her association with the project in a post and she wrote: "Super excited to join the team of Sooryavanshi with the incredible Rohit Shetty for the first time. Can't wait to be back on set with Akshay Kumar after so long and the inimitable Karan Johar."

Sooryavanshi also stars Neena Gupta in a pivotal role. The film's release date has not been announced as of now.