Inshallah will be a romantic drama, while Sooryavanshi will be a high-octane action film 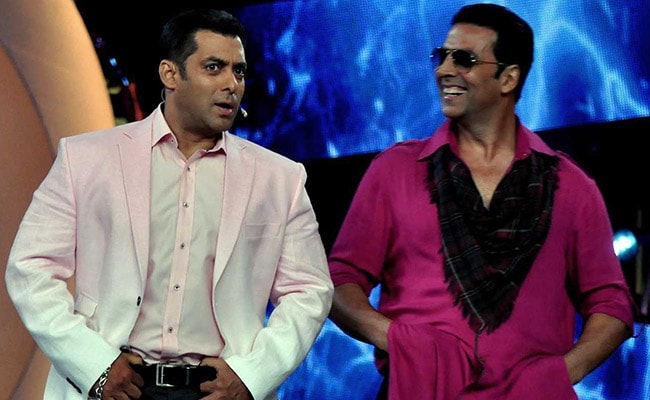 Salman Khan (L) and Akshay Kumar (R) photographed at an event in Mumbai.

Salman Khan allegedly made a phone call to his colleague Akshay Kumar in order to avoid a box office clash in 2020, reports Mumbai Mirror. According to the report, when Salman learnt that Akshay Kumar's Sooryavanshi might clash with his film Inshallah on Eid next year, the actor called up Akshay to avoid a possible clash at the box office. "Salman Khan recently called up Akshay and said that he would ensure there isn't any clash in the two mega films. Of course it would be good for their box office collections," Mumbai Mirror reports.

Eid is a festival that almost always sees a Salman Khan film release - the list includes Bodyguard, Kick, Ek Tha Tiger and Race 3 - and very few actors are willing to go up against a Salman film. Ayan Mukerji rescheduled Brahmastra to 2020 so that it wouldn't clash with Salman Khan's Dabangg 3, expected to hit screens this December. In 2016, Shah Rukh Khan pushed back the release of his film Raees by several months to avoid meeting Salman's Sultan at the box office. Raees eventually released on the same day as Hrithik Roshan's Kaabil.

Hrithik Roshan's Mohenjo Daro also clashed with Akshay Kumar's Rustom in 2016. Akshay is clearly no stranger to box office competition, his Gold having released on the same day as John Abraham's Satyameva Jayate last year. Akshay's Mission Mangal is also gearing up for a possible three-way clash on Independence Day next year with Prabhas' Saaho and John's Batla House.

Salman Khan is currently busy with the promotional duties of Bharat, co-starring Katrina Kaif, which is slated for an Eid 2019 release. He is also filming Dabangg 3.

Sooryavanshi, on the other hand, is a cop-drama, which will be directed by Rohit Shetty. Besides Akshay, the film also stars Katrina Kaif and it will be produced by Karan Johar's Dharma Productions. In the film, Akshay will be seen playing the role of Veer Sooryavanshi, who reportedly is the Anti-Terrorism Squad chief.